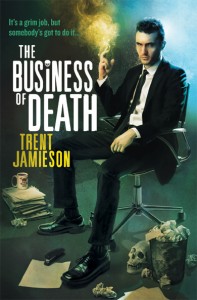 People often ask me, how do I find artists for books. And there’s never one good answer…I try to stay on top of established scifi and fantasy artists through places like Spectrum and assorted illustration annuals. I also like to keep an eye on people working more in the fine-art and urban art realm thru mags like Juxtapoz and Hi Fructose. I have a long history in comics (yes I was a Comic Shop Girl) and I pull artists across the divide between comics and books. Agents send me updated work from artists constantly. And facebook, believe it or not, has been a great tool for me to find emerging artists.

The real problem isn’t finding good artists, it’s wishing I had enough good projects for all the fabulous artists I know of! And I love getting people who haven’t worked on a lot of book covers to work on a cover for me, I think it keeps the art really fresh. So I am always walking around with a “dream team” list in the back of my head. And David Seidman was on that list for a while…until I heard that we were going to do an omnibus edition of Trent Jamieson’s Deathworks Series, and I knew he would be perfect for it. I’m not sure where I first saw David’s work. It was either on facebook or it was his Coheed and Cambria picture disk. Either way I just had a gut feeling he would have a fabulous take on these books, which is kind of a little Constantine by way of The Office. Or Office Space, actually. We really wanted to capture the bored sick-of-this-damn-cubicle attitude, while showing a bit of the supernatural. If you want to get a good intro you can read the opener here.

As you’ve been reading over the last few cover posts, I love doing omnibus editions. I like them as a fan, there’s nothing better than getting a big honking bible-sized edition of a series, and as an art director, I love getting a chance to reinvent a character. This redesign started with shooting the right photo reference with Shirley Green. (Often an artist shoots his own reference photo, but the editors and I had such a strong sense of what we wanted that I art directed the shoot then sent the images we picked to David). We had a heck of a time finding the right model. We knew we wanted someone out of the vein of beefcake, someone cool, who could look so very fed up and a bit pissed. And look good in a suit, of course! But we settled on Jonathan Taylor and he was a great model, and totally a geek too, which makes it all so much more fun. Anyway then we picked poses we liked in-house, then sent the winner to David. He & I went back a bunch talking about tone and color, and he produced this fabulous illustration. So enjoy BIG after the jump, along with some shots of the various stages. And a teaser, of course…

David weighed in on the cover process too:

“It is always exciting to work with a new client and see what stories and ideas they bring your way.  The concept behind The Business of Death was right up my alley and made this cover a blast to work on.  Plus, anytime I can work a skull onto a cover, it is a good day.”

Reaping.  It’s a grim job, but someone’s got to do it.

Life is tough at the top when work is a matter of life or death.

It’s one thing to run Mortmax International as head of a team, but it’s quite another to rule alone.  Staff fatalities have left Steven by himself on the Throne of Death, and there’s no time to get comfortable.  The Stirrer god’s arrival is imminent, threatening life as we know it. Plus Steven has managed to mortally offend the only ally strong enough to help out.

And how can he ask someone to marry him when the End of Days seems inevitable? As if they’re going to think he’s committed. The portents don’t look good as a comet burns vast and looming in the sky and Steven can almost hear a dark clock ticking. He will have to play nice if he wants his ally back, and must address the madness of the Hungry Death within himself if he even has a chance at defeating the Stirrer god.

If he fails, Hell and Earth are doomed and wedding bells will be quite out of the question.