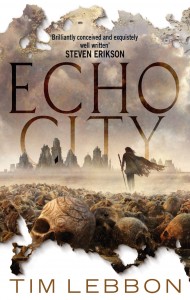 This week sees the release of ECHO CITY, an atmospheric dark fantasy from New York Times bestselling author Tim Lebbon. Described by Steven Erikson as “brilliantly conceived and exquisitely well written” ECHO CITY explores the consequences of a stranger’s arrival in a society where the outside world is no more than a myth.

Echo City lies at the heart of a poisonous desert. It is a place ruled by tradition, where history has been forgotten and the secrets of the past are little more than echoes beneath the dusty streets. The inhabitants of this labyrinthine metropolis know but one truth: they are alone in the world. No life exists beyond their walls.

So when a stranger from beyond the desert arrives, everything they’ve believed in is suddenly proven false. As centuries of tradition and stasis come to an end, different political groups prepare to fight a war for the future of their city.

Yet soon they will face a far greater threat. For unknown to them, an ancient force is awakening in the darkness below Echo City . . . and soon it will reach the surface.

ECHO CITY has already received considerable praise from both print and online media.

“Lebbon’s prose is a pleasure, and so too his seamless hybridisation of horror and dark fantasy – were there to be another novel set in the same world, I’d gladly go back for a second helping” – SPECULATIVE SCOTSMAN

“Echo City  is a gloriously atmospheric piece that pulls you right into the various Cantons and leaves you on the wall of the city, staring out across the desert and wondering what lies beyond the horizon . . . An engrossing story” – GRAEME’S FANTASY BOOK REVIEW

For a taster of what is one of the fantasy releases of 2011, check out this exclusive extract.