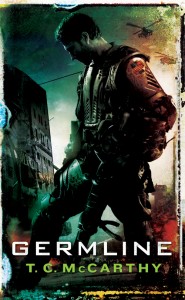 Two years ago, in the fall of 2009, I received a submission for the book that would eventually become Germline. At the time, it was more a series of linked novellas than a novel, but immediately I knew there was something there. The writing was incredibly raw, utterly riveting, and simply exciting. This was military science fiction– there were super soldiers, futuristic weaponry, powered armor– but not like I’d ever seen it before. The emotional depth to the characters was incredible and their experiences were genuinely harrowing. That first read through reminded me more of accounts from actual soldiers and journalists embedded in the field than the standard action-movie fare. This was The Hurt Locker, and Jarhead, and Restrepo… just with super soldiers, flachette rifles, and powered armor.

Now, Germline is finally here in its finished form. The first of three novels, each telling the story of this future war through the eyes of a different combatant: a journalist on the front lines, a genetically engineered soldier, and a man tasked with hunting down escaped genetics.

The early reviews have been stellar:

A portrait of the effects of battlefield stress that is difficult to bear but impossible to put down. — PW Starred Review

Germline is an engaging, compelling, and quick read — The Alternative One

Gritty and furious … a fantastic story of what war may become. — Adventures in Sci Fi Publishing

Germline is out now. The description is below:

War is Oscar Wendell’s ticket to greatness. A reporter for The Stars and Stripes, he has the only one way pass to the front lines of a brutal war over natural resources buried underneath the icy, mineral rich mountains of Kazakhstan.

But war is nothing like he expected. Heavily armored soldiers battle genetically engineered troops hundreds of meters below the surface. The genetics-the germline soldiers-are the key to winning this war, but some inventions can’t be un-done. Some technologies can’t be put back in the box.

Kaz will change everything, not least Oscar himself. Hooked on a dangerous cocktail of adrenaline and drugs, Oscar doesn’t find the war, the war finds him.