At the after-show party (it was as glamorous as it sounds, honest) the beer and conversation flowed, and a fine time was had by the authors, editors and bloggers who attended.

Here are some photos of the day – if you missed it, don’t worry: there will a bigger, even better event next year! 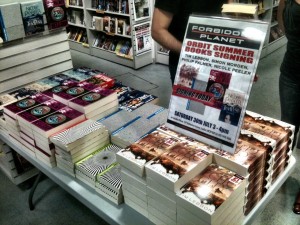 So awesome was this haul of books that it had to have two guards protecting it at all times. The copies of EQUATIONS OF LIFE (UK | US | ANZ) were deliberately placed at the front to lure people in with their hypnotic covers. Dastardly, we know. 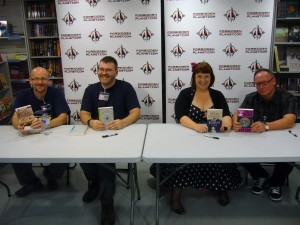 The fantastic four, bracing themselves for the coming signing. 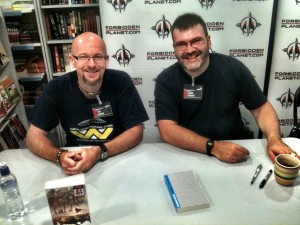 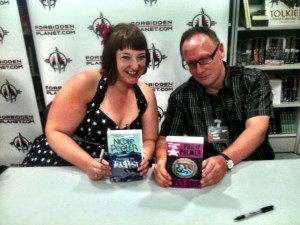 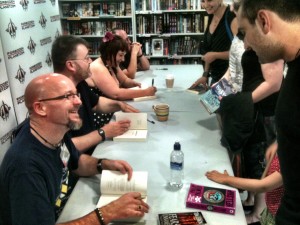 . . . the floodgates opened, and the book-signing action began. 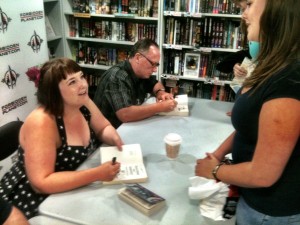 Nicole chatting with a fan, while Philip remorselessly defaces a copy of HELL SHIP (UK | US | ANZ) in the background. 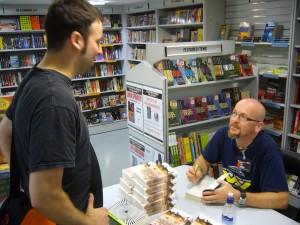 Jared from UK genre blog Pornokitsch telling Tim what a great book ECHO CITY (UK | ANZ) is. Tim already knows this, since he wrote it. 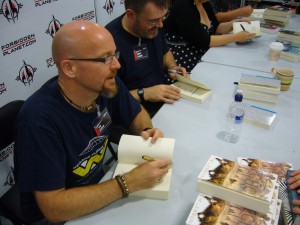 Signing books is a tiring business. Disaster almost struck when Tim fell asleep in the middle of scrawling his name. 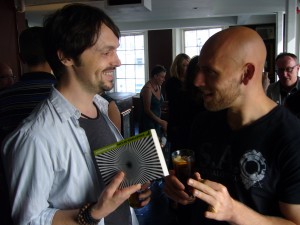 Fortunately, the after-show party provided much needed liquid refreshment. Here, two gentlemen discuss how brilliant Simon Morden’s EQUATIONS OF LIFE is (it’s not yet been established whether this was a genuine conversation, or if they were lulled into a trance by the book’s hypnotic powers).

Thanks to everyone who attended and made this event such a success! Roll on the Orbit Summer Signing 2012 . . .