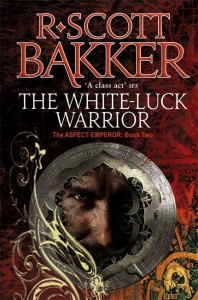 Over the last few years, R. Scott Bakker has established himself at the forefront of the epic fantasy genre,  known not just for his tales of grand battles, dangerous intrigue and explosive sorcery, but also for his detailed worldbuilding and the philosophical undertones in his writing.

His latest novel THE WHITE-LUCK WARRIOR [UK | ANZ] is now out in mass market paperback, and is his best novel to date. Adam Whitehead, of excellent UK genre blog The Wertzone, had this to say:

“The White-Luck Warrior (*****) is a powerful, engrossing, ferociously intelligent novel that sees Bakker at the very top of his game. It leaves the reader on the edge of their seat for the concluding volume of the trilogy, The Unholy Consult, which we need yesterday.”

To celebrate the release of THE WHITE-LUCK WARRIOR, Adam conducted an interview with Scott and the result is a fascinating discussion that covers Scott’s entire career, from his original influences to the development of epic fantasy in recent years.

Scott, I have to start by asking those most dreaded of general questions: how would you describe your books and what they are about for newcomers? Why should they read The Prince of Nothing and The Aspect-Emperor series?

I wrote The Prince of Nothing and The Aspect-Emperor for two kinds of fantasy readers: those who love believing in secondary fantasy worlds, and those who think they have ‘outgrown’ the genre. Over and above that, they’re dark, violent, cerebral and genuinely controversial. I’m beginning to think they have a real shot at becoming ‘classics.’

What was the original impetus behind writing the series? You’ve mentioned your appreciation of authors like J.R.R. Tolkien and Frank Herbert, and developing Earwa as a roleplaying setting when you were much younger. How did those influences feed into the writing of the series?

They say our neural architecture is wild and bushy throughout childhood, and then in adolescence the brain begins to prune and streamline its structure. This could be why our teenage reading stamps our sensibilities so profoundly: I’m sure when I die and the medical community dissects my brain in the name of scientific comedy they will find little Guild Navigators playing D&D with lecherous old orcs. The thing for me was never allowing university convince me I needed to turn my back on these things,  always remembering they were so popular and so appealing precisely because they were so profound.

Your work is noted for taking a darker, more philosophical approach to the epic fantasy genre than many other

authors, whilst still retaining core elements of the genre like impressive sorcery, detailed worldbuilding, major battles and horrific monsters. You seem to be paying homage to the fantasy genre at the same time that you are deconstructing and subverting it. Is that a fair analysis? If so, how do handle these elements and keep them in balance?

Literary types will tell you that pulp genres are ‘cages,’ things that need to be dismantled, ‘deconstructed,’ when in fact they’re much more akin to dialects, different ways to communicate to different readers. Complicating is basically all that I do. I try to inject as much historical, psychological, thematic, and moral complexity into the epic fantastic template as I can, to write a kind of ‘high resolution’ version of a powerful traditional form. The only thing ‘subverted’ is the apparent simplicity of a particular genre of storytelling,

There seems to be a number of science fiction and fantasy authors emerging from Canada in the last decade or so who have found success in writing books that, whilst still part of the spec fic genre, are more challenging and ask more difficult questions of the reader than perhaps they are used to. Yourself, Peter Watts and Steve Erikson immediately spring to mind. Is there something in the Canadian experience that leads to authors taking this approach?

Because Canada never gave up on eugenics. According to recently declassified documents, in 1951 Prime Minister John Diefenbaker sanctioned an ultrasecret strategic initiative codenamed, How-do-you-like-me-so-far? At the time, Canadians were widely regarded the dullest people on earth and a number of experts had warned that this would seriously undermine the country’s economic position over the coming decades. Agents were dispatched worldwide, tasked with securing sperm samples from some of the world’s most interesting minds. The results were mixed. Some, like Operation Asimov, were arguably too successful. Whereas Operation Jimmy Dean ended in a widely publicized car crash (and years of strained diplomatic relations with Hollywood). Apparently, I’m the product of operation Tolkien. I can’t speak for the others.

Thanks to the vision of Diefenbaker, Canada is now the second least boring country in the world – after Scotland.

One of the trailblazers in the ‘darker, edgier yet commercially successful’ fantasy field has of course been George R.R. Martin’s A Song of Ice and Fire series, of which I know you are a fan. Did you find the success of that series a help in selling your own work? Certainly there seems to be a large crossover between fans of that series and your own (if the discussions on certain message boards are to go by, anyway!).

The whole fantasy genre owes George a huge debt of commercial gratitude–of that I have no doubt. There’s no counting the number of lapsed fantasy fans he has brought back into the fold. Personally, I would never have pursued publication at all had not the grittiness and complexity of A GAME OF THRONES convinced me that publishers might be interested in THE DARKNESS THAT COMES BEFORE. And there’s no doubt in my mind that the crossover readership between my series and his is one of the things that has allowed mine to grow.

In a similar vein, a while ago you reported that Hollywood had taken an interest in adapting your books, potentially as a TV mini-series, before putting plans on ice due to the financial crisis. Given the immense success of the GAME OF THRONES TV series awakening an interest in other fantasy properties, have there been any more developments on this front? Could we yet see the Holy War rolling across our TV screens?

Nothing to report, I’m afraid. As soon as they catch wind of the Sranc they run for the hills–as well they should.

(more or less) of the entire Earwa cycle of books. Where do you see it standing amongst the whole? Certainly there are some big revelations and some more important questions about the world and the people involved are raised. Is it a challenge to know when to provide answers and when to hold back?

One of the things so fascinating about epic fantasy in particular is the way the boundary between plot and setting dissolves, so that learning about the world becomes a kind of narrative revelation. Through to the end of THE JUDGING EYE, the reader was largely confined to one world, the human fleshpots of the Three Seas. What lay outside could only be glimpsed in the form of obscure references. THE WHITE-LUCK WARRIOR chased them beyond these boundaries, into the inhuman wildernesses of the Ancient North and the metaphysical enigmas of the Outside. Because these worlds are so tightly bound to the story I really have little or no difficulty deciding what should be revealed when: it almost feels like the characters are calling the shots, telling me what they need to know when.

The next book in the series is THE UNHOLY CONSULT, which you’ve already spoken of as being the biggest gamechanger in the whole series to date. How is work progressing with that book and when do you think it might be done?

THE UNHOLY CONSULT has been progressing more slowly than I would like. I was hoping for a fall release, but it will likely have to be pushed back to next year. Each book has had it’s particular struggles attached, but none quite so profound as this. We have a small child now, and this has forced me to abandon all my old habits and routines–two things which have been the cornerstone of my productivity since the beginning. I’ve also had to do some teaching and other work; if publishing does go the way of the music industry, all mid-list writers need to be prepared. Good writing is typically a maniacal, obsessive, experience for me–of the kind which, quite frankly, parenthood and moonlighting simply do not allow (certainly when children are quite young). There’s life and there’s the book–and there’s me, trying to write in the middle of what seems a war sometimes!

But war can be good, so long as it finds its way to the page in the right way.

In the meantime you are releasing a series of short stories called THE ATROCITY TALES on your website, which delve deeper into the past and backstory of the setting. Why did you decide to write these stories? Any chance we might see them collected together in a short story collection at a later date?

The idea for the Atrocity Tales has been kicking around for quite some time. The two I’ve completed came about quite independently: the one, “The False Sun,” came to me in the course of working on the final two chapters of THE UNHOLY CONSULT. The intricacy of the plot and world is such that a single tale set in the past can have enormous significance, generating all sorts of meanings and possibilities. The other, “The Four Revelations of Cinial’jin,” is a narrative experiment I’ve had in mind for quite some time: what would a Nonman stream-of-consciousness look like? I’m not sure when I’ll be completing any others–certainly not before THE UNHOLY CONSULT is complete!

Many thanks to Adam and Scott for a great interview!

The worldbuilding is once again top notch. Bakker’s narrative is richly detailed, creating an imagery that leaps off the page . . . The White-Luck Warrior is everything Bakker fans could hope for” – PAT’S FANTASY HOTLIST (8.5/10 rating)

“The White-Luck Warrior contains a unity of theme and action that is rarely seen in epic/heroic fantasies.  The characterizations are superb and the stage has been set for a massive conflagration in the final volume of this middle series” – OF BLOG

“‘Intelligent’ is a term trotted out so often by publishers that it has become almost worthless – which is hard for the likes of Bakker, whose The Darkness That Comes Before truly is intelligent, and original, and all those other overused words” – GUARDIAN

“Exquisitely intelligent and beautifully written, R. Scott Bakker’s first novel in The Prince of Nothing series inspires both confidence and anticipation–this is fantasy with muscle and brains, rife with intrigue and admirable depth of character, set in a world laden with history and detail.  Take note, one and all, something remarkable has begun . . . ”  – Steven Erikson, author of the bestselling Malazan series

“No clunky analogy of medieval Europe here. Fascinating characters in a world full of trouble and sorcery” – SFX

“Bakker’s language is undeniably lovely; his prose so beautifully, beautifully hewn that it’s a real treat” – THE SPECULATIVE SCOTSMAN

Scott can be found online at his blog, Three Pound Brain.