Orbit UK is thrilled to announce that we can release an early ebook edition of “By Grace and Banners Fallen”, the prologue to A MEMORY OF LIGHT [UK | ANZ] on 2 October 2012, ahead of publication of the hardback next January. This early ebook version of the prologue will be available in the UK, Australia, New Zealand and all our international markets where Orbit UK digital editions are usually sold. 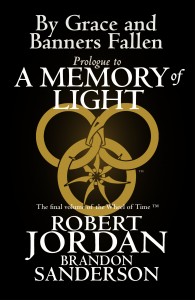 A MEMORY OF LIGHT, by Robert Jordan and Brandon Sanderson, is the final book in the phenomenally successful Wheel of Time series, which for the last twenty years has enthralled millions of readers around the world.

And it came to pass in those days, as it had come before and would come again, that the Dark lay heavy on the land and weighed down the hearts of men, and the green things failed, and hope died.

From Charal Drianaan te Calamon, The Cycle of the Dragon

All humanity is in peril – and the outcome will be decided in Shayol Ghul itself. The Wheel is turning and the Age is coming to its end. The Last Battle will determine the fate of the world . . .

A MEMORY OF LIGHT publishes in hardback on 8 January 2013.