Gail Z. Martin’s Days of the Dead tour kicks off today! For exclusive excerpts from her upcoming novel, ICE FORGED (UK | US | AUS) and other literary goodies, keep an eye on www.ascendantkingdoms.com and her partner sites for the next week. Visit her website for further details or head on over to Goodreads and participate in a week-long Q & A with the author! 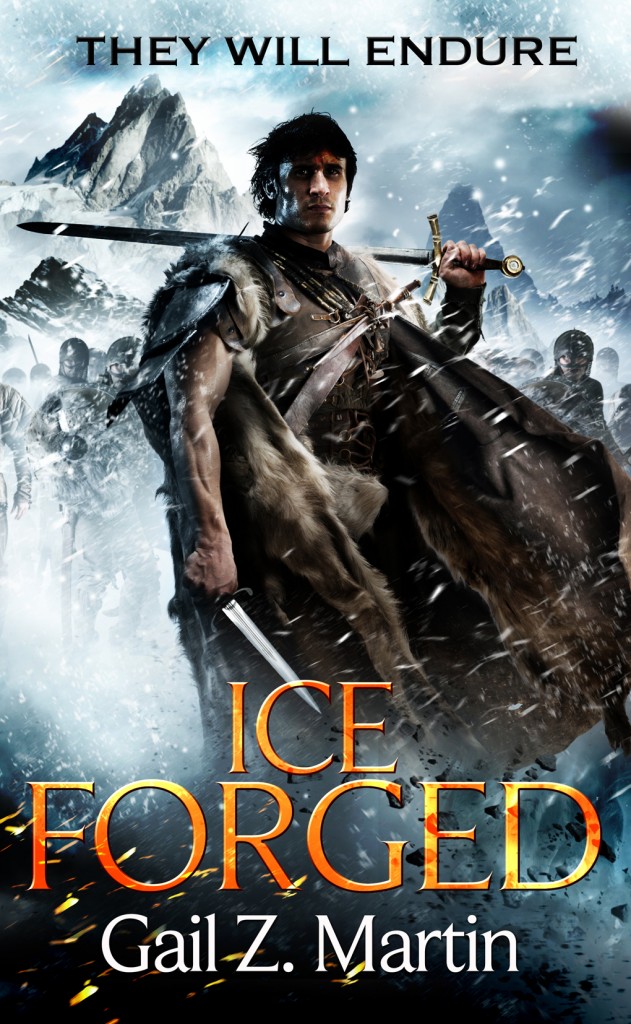 Ice Forged, which debuts in January, is my seventh epic fantasy novel, and it’s definitely the darkest and edgiest so far.
My main character Blaine McFadden is exiled to a prison colony at the northernmost edge of his world, a place where the weather itself is a remorseless enemy.  Ice, snow, bitter cold and darkness pose as deadly a threat as the wild magic, assassins, and sadistic prison guards.  Extreme conditions tend to show what someone is really made of, because life or death hinge on luck and choices.

I suspect that Ice Forged feels edgier than some of my other books for a variety of reasons.  To some extent, that edginess is probably a product of our times, which have been tumultuous—to say the least.  I imagine it also reflects the changes I’ve experienced in the almost 10 years since I wrote my first novel—perhaps some of that “youthful enthusiasm” has worn thin on the edges.  Mostly, I feel that I’m bringing a different perspective to these books, one that’s a little grittier than before.  It’s a fitting feel for the book, which hinges on a few questions my characters have to answer—and ones that I hope my readers will also try on for size:

When there’s nothing left to lose, what would you do to survive?

How much would you give for a chance to put things right?

Blaine McFadden gets to find out.

I think the edginess in the book is something to which readers can relate.  With the volatility in the global economy, most people have felt “on edge.”  Nothing feels secure, and even if people haven’t been personally affected by the downturn, the sense that everything is wobbly seems to permeate every facet of life.  But I don’t believe that edginess needs to mean hopeless.  Anyone can face adversity; the people who fascinate me—in real life and as characters—are the ones who find a way to rise above.  Blaine experiences desperate circumstances, and while illusions are shattered and innocence is long lost, that grittiness hones a fine edge to his personality, something that will serve him well in the dangerous days ahead.

Today’s reader may prefer edginess and grit because they know that life isn’t easy or fair, and because they have been failed by many of the institutions in which they have put their trust.  That edginess makes a book more believable, but I don’t think it precludes a new breed of heroes, ones who show us how to chart a new course even after we’ve lost our way.

My annual Days of the Dead blog tour celebrates Halloween, Samhain, Dia De Los Muertos, All Hallows’ Eve—you get the picture!  I’m throwing an online party—with downloadable party favors—and you’re invited!  You can see where I’ve spread the goodies out across all my partner sites at www.ascendantkingdoms.com—plus some downloadable excerpt “treats” to enjoy!

Gail Z. Martin is the author of two other Orbit novels: The Sworn and The Dread, both in The Fallen Kingdoms Cycle.  Ice Forged is Book One in her brand new Ascendant Kingdoms Saga.  You can read an excerpt from Ice Forged here.