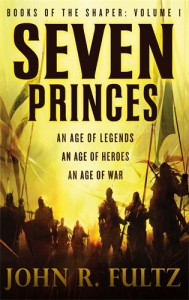 There’s a lot to love about John F. Fultz’s SEVEN PRINCES (UK | US | ANZ) which we published earlier this year, not least its impressively epic nature (io9.com certainly felt the same way – “It’s epic with a capital EPIC” they said in their excellent review). But one of the things we loved most about it are the terrifying monsters.

They’re everywhere in the world of Fultz’s Shaper series: giant serpents with teeth like swords, shadow bats as deadly as they are huge, and tentacled monstrosities from the depths who think nothing of pulling a ship or two under the waves. And the good news for fans of SEVEN PRINCES is that you’ve seen nothing yet: the beasts that lurk within the pages of SEVEN KINGS (UK | US | ANZ) – out in January – are even more fearsome.

Naturally this got us thinking about the various monsters in fantasy and SF films and literature, 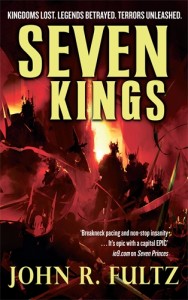 so we put together a list of some of our favourites!

The Balrog from The Lord of the Rings

There’s no doubt that Tolkien loved a monster or two – Middle Earth is full of them, from giant spiders to flame-breathing dragons to ferocious wargs. While the aquatic horror that is the Watcher in the Water ran it pretty close, the flame-tastic Balrog takes the accolade as our favourite Middle Earth monster. Just one was enough to put the entire Fellowship of the Ring to flight; Sauron’s predecessor Morgoth was said to have a ‘host’ of them that apparently flew on the backs of dragons. Now that is something we’d like to see. Make it happen, Mr Jackson.

The Sarlacc from Star Wars

The Rancor offered some tough competition, but for us the Sarlacc is easily the more terrifying. Perhaps it’s the tentacles, which have an uncanny ability to make your skin crawl.  Or the unnervingly plant-like beak. On the other hand, it’s probably the fact that the Sarlacc’s victims are slowly digested over the course of a thousand years. Boba Fett is apparently the only known person to have escaped the depths of the Sarlaac’s belly, so if you do have the misfortune to be swallowed by one, you better be wearing Mandalorian body armour.

Corpsers from Gears of War

The Locust Horde have plenty of fearsome monsters within their ranks, and the corpsers are (literally) at the forefront. Responsible for the ’emergence holes’ that opened up on the surface of Sera on Emergence Day, they were the first members of the Locust horde that the humans of Sera ever saw – and they could hardly have had a more terrifying introduction. Spider-like and standing 40-50 feet tall, with glowing red eyes and huge legs that look uncomfortably like gnarled fingers, the corpsers are not the usual sort of critter you’d find in the bathtub. Fortunately.

The Others / White Walkers from Game of Thrones

“In that darkness the White Walkers came for the first time. They swept through cities and kingdoms, riding their dead horses, hunting with their packs of pale spiders big as hounds.” Old Nan’s not kidding, you know. We’re yet to see a giant pale spider, but we’ve seen a few dead horses and the scary things riding them. The simple truth is that the Others (or the White Walkers as they’re called in the TV adaptation) have always been one of the most frightening elements of George R. R. Martin’s world. Unlike the three previous entries on this list, they’re not supersized. But what they lack in sheer physique, they make up for in their chilling appearance (literally), their silent, menacing presence, and their ability to raise and command the dead. Which, if you’re intent on destroying humankind, is a pretty useful skill to have.

The Sea Monsters from Beowulf

The one thing this list is missing is an aquatic terror, and in this department we’re really spoilt for choice – thanks in part to the likes of Mega Shark vs Giant Octopus and Mega Shark vs Crocosaurus, not to mention Sharktopus. The previously-mentioned Watcher in the Water is a firm favourite, as is the legendary Kraken who most recently appeared in Clash of the Titans, but in the end we plumped for the sea monsters from the 2007 incarnation of Beowulf. For what they lack in tentacles, they make up for with their huge, crooked array of teeth. They’re also huge, which, let’s face it, is the most basic requirement for any sea monster. But it’s perhaps the single eye in the centre of their heads that makes them memorable. Until Beowulf sticks a sword in it, at least.

So those are some of our favourites, though in all honesty we could talk all day about monsters. Now it’s your turn – what are your favourite monsters from fantasy and SFF films and literature?