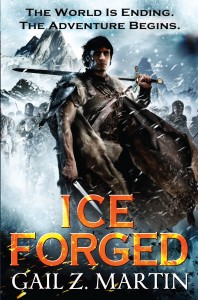 What does a good book have in common with the Godfather?

They’ll both make you an offer you can’t refuse.

That first line has to grab the reader and offer him the lure of an adventure so compelling he or she can’t walk away.

What makes a great line?  For me, it’s the promise of something exciting and unexpected.  If the action begins in the middle of a battle, I want to know who is fighting whom, and why.  If the statement is confounding, my curiosity is aroused and I want to know more, like Alice following the rabbit down the hole.

A good first sentence can transport a reader to a different world, or tilt the real world enough to make it a strange and foreboding place, the kind of place where magic and hobgoblins just might exist.  It’s the siren’s song and the Pied Piper, the fairies luring you into the mist.  Once you set foot along the path, there’s no going back, and if you do return, you’ll be changed.  In fact, that’s the bargain.  When a reader follows the trail of bread crumbs into the woods, he or she wants to be changed—as well as excited, enthralled and maybe even enlightened.  If you’re not different when you come back from an adventure, after all, what was the point?

My new novel, ICE FORGED (US | UK | AUS), begins with a man who has reached his breaking point.  “This has to end,” Blaine McFadden says.  He means the abuse his father has doled out to everyone in the household.  But in fact, everything is ending: his life as he knows it, his kingdom, and the magic of the realm.  Blaine’s rage sets into motion a chain of events that send him into exile, subject him to grinding hardship—and just might make him the only man who can bring back the magic that was destroyed.

I wanted the reader to ask, “What has to end?”  Then, as the next sentences unfold to explain the reason for Blaine’s rage, I want to catch the reader up in the urgency—and the consequences—of the actions he takes.  With that sentence, the reader steps onto my roller coaster, and the ride picks up speed with every sentence.

Now that it’s my job to seduce readers with a tempting first line, I find that I have even more respect for the masters who add joy to my life by luring me into their own fictional thrill rides.

The Hobbit (J.R.R. Tolkien)—”In a hole in the ground there lived a hobbit.  Not a nasty, dirty, wet hole, filled with the ends of worms and an oozy smell, nor yet a dry, bare, sandy hole with nothing in it to sit down on or to eat: it was a hobbit-hole, and that means comfort.”

Neverwhere (Neil Gaiman)—”She had been running for four days now, a harum-scarum tumbling flight through passages and tunnels.”

Callahan’s Crosstime Saloon (Spider Robinson)—”Callahan’s Place was pretty lively that night.  Talk fought Budweiser for mouth space all over the joint, and the beer nuts supply was critical.”

Guardians of the Flame (Joel Rosenberg)—“Baron, you’re an asshole, Karl Cullinane thought as he approached the keep, crawling on his belly through the tall grass.”

The Wizard in Spite of Himself (Christopher Stasheff)—”The asteroid hurtled in from Capricorn, nosed around a G-type sun, swerved off toward the fifth planet.  Such a trajectory is somewhat atypical for asteroids.”

Hitchhiker’s Guide to the Galaxy (Douglas Adams)—”Far out in the uncharted backwaters of the unfashionable end of the Western Spiral arm of the Galaxy lies a small unregarded yellow sun.”

On a Pale Horse (Piers Anthony)—“Death,” the proprietor said clearly, showing the stone.”

Undead and Unwed (MaryJanice Davidson)—”The day I died started out bad and got worse in a hurry.”

A Christmas Carol (Charles Dickens)—”Marley was dead: to begin with.?

It (Stephen King)—”The terror, which would not end for another twenty-eight years—if it ever did end—began, so far as I know or can tell, with a boat made from a sheet of newspaper floating down a gutter swollen with rain.”

The Spirit Thief (Rachel Aaron)—”In the prison under the castle Allaze, in the dark, moldy cells where the greatest criminals in Mellinor spent the remainder of their lives counting rocks to stave off madness, Eli Monpress was trying to wake up a door.”

Harry Potter and the Sorcerer’s Stone (J.K. Rowling)—”Mr. and Mrs. Dursley, of number four, Privet Drive, were proud to say that they were perfectly normal, thank you very much.”

It’s certainly not an exhaustive list, and no doubt readers will have additions—and I hope you suggest them in the comments.  So if you don’t see your favorite here—please add it!  And the next time you pick up a book, pay attention to the first line.  An author worked very hard to get your attention.

Gail Z. Martin’s newest book, Ice Forged: Book One in the Ascendant Kingdoms Saga, releases this week online and in stores everywhere.  Gail is also the author of the Chronicles of the Necromancer series and The Fallen Kings Cycle.  For more about Gail’s books and short stories, visit www.AscendantKingdoms.com or connect with other fans on Facebook and Goodreads.