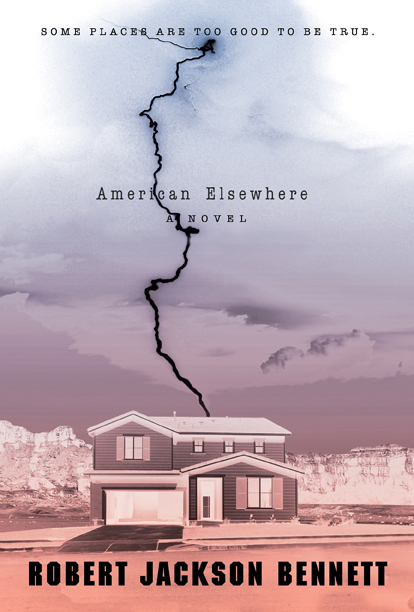 Art first glance Wink, New Mexico is a seemingly normal town except that you won’t’ find it on any map. You see Wink should not exist, but that is not the strangest thing you’ll find there when you crack open AMERICAN ELSEWHERE (US | UK | AUS) –  the latest novel from Edgar Award winning author Robert JacksonBennett.

Check out Publishers Weekly starred review and read the first chapter of this riveting novel.

“Bennett (The Troupe) gives the idealized image of the American dream a pan-dimensional twist with this alien invasion tale, part Bradbury and part L’Engle with a dash of Edward Scissorhands…Through sharp empathetic detail, the horrific becomes both achingly poignant and comic; a wholesome diner where no one can ever order just one piece of pie shares space with a harsh alien landscape where a quivering blue imp cowers in terror while pleading for his life. Readers will be captivated from start to finish.” – Publishers Weekly (starred review)

Even though it is a fairly cool night, Norris is sweating abundantly. The sweat leaks out of his temples and the top of his skull and runs down his cheeks to pool around his collarbones. He feels little trickles weaving down his arms to soak into the elbows and wrists of his shirt. The entire car now has a saline reek, like a locker room.

Norris is sitting in the driver’s seat with the car running, and for the past twenty minutes he’s been debating whether leaving the car running was a good idea or not. He’s made several mental charts of pros and cons and probabilities, and overall he thinks it was a good idea: the odds that someone will notice the sound of a car idling on this neighborhood lane, and check it out and sense something suspicious, feel fairly low; whereas the odds of him fumbling with the ignition or the clutch if he needs to start the car quickly seem very, very high right now. He is so convinced of his own impending clumsiness that he hasn’t even dared to take his hands off the steering wheel. He is gripping it so hard and his palms are so sweaty that he doesn’t know if he could remove them if he tried. Suction, he thinks. I’m stuck here forever, no matter who notices what.

He’s not sure why he’s so worried about being noticed. No one lives in the neighboring houses. Though it is not posted anywhere—in any visual manner, that is—this part of town is not open to the public. There is only one resident on this street.

Norris leans forward in his seat to reexamine the house. He is parked right before its front walk. Behind the car is a small, neat gravel driveway that breaks off from the paved road and curves down the slope to a massive garage. The house itself is very, very big, but its size is mostly hidden behind the Englemann spruces; one can make out only hints of pristine white wooden siding, sprawling lantana, perfectly draped windows, and clean red-brick walls. And there, at the end of the front walk, is a modest, inviting front door with a coat of bright red paint and a cheery bronze handle.

It is a flawless house, really, a dream house. It is a dream house not only in the sense that anyone would dream of living there; rather, it is so perfect that a house like this could exist only in a dream.

Read the rest of this excerpt.