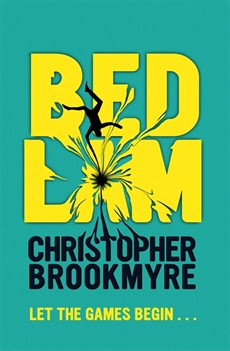 We’ve just released BEDLAM, where Ross Baker, an overworked scientist from Scotland, is shocked to wake up inside what seems to be one of his childhood favourite computer games – a mad, violent world where cyborgs fight humans and skies are filled with explosive space battles. How did he get there, and how will he ever escape? Read Christopher Brookmyre’s BEDLAM (UK|ANZ) to find out!

We asked Chris about the moments in his gaming history that shocked him, where he had felt a little like Ross, thrust into a hyper-real world he’d never experienced before, and this is what he had to say . . .

Up until this point, the games I played had taken place in environments contained within a single screen, which had to be completed before the player was rewarded with access to the next one. MANIC MINER, adored though it was, had followed this model, meaning that players became grindingly over-familiar with the early levels, traversing them over and over again in their quest to glimpse virgin territory, usually for about three seconds before being killed. MANIC MINER’S legendary sequel allowed the player to roam free, exploring anywhere their split-second timing allowed them to reach. Willy’s mansion consequently felt like a true place rather than a sequence of screens, even if it didn’t quite geometrically add up.

POPULOUS – I can haz earthquake?

An early wonder of the Commodore Amiga, POPULOUS effectively created the genre of the ‘god game’. For the first time, instead of navigating an environment, the player could shape it: raising the land, flattening mountains, raining down vulcanism and, of course, being worshipped by your people.

QUAKE – Physics can be fun.

Its story was back-of-a-fag-packet stuff and its visual design was a confused mismatch, but none of that mattered much when you were flying through the air, courtesy of your own splash-damage, blazing death upon your enemies below while you followed the graceful arc of your rocket jump. DOOM gave us a convincing first-person perspective, but QUAKE was the first game to be truly three-dimensional, memorably showcasing its physics early in the game with the low-gravity secret level, Ziggurat Vertigo.

HALF-LIFE – Who gave you permission to think?

By the late Nineties, the AI in even the most advanced games meant that enemies seldom bothered following you out of a room. They would wait, patiently and politely, for you to come back and resume hostilities. I recall following the usual protocol the first time I encountered the enemy soldiers in the Black Mesa Complex: quickly ducking behind a stack of crates while I readied myself for an offensive. When I heard a clunk and looked down, spotting that a grenade had been lobbed over and landed at my feet, I realised things were never going to be the same.

Contrary to the impressions given by years of moral panic and tabloid hysteria, I’d never thought a video game could be genuinely frightening. My own imagination imbued various games with atmosphere over the years, and I still remember a few well-designed jump-scares in QUAKE 2, but the idea of being terrified by sprites, pixels and polygons was absurd. Then came DOOM 3, with its constant steam-choked darkness, penetrable only by a flashlight which you had to hold instead of a gun. I recall playing the game late at night with the lights off and my headphones on, but not for long. I think there are still stains on the chair.