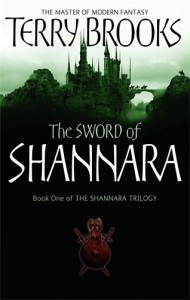 Everyone remembers their first time.

Mine was back in the mid-1990s. A close friend excitedly showed me a book called THE SWORD OF SHANNARA (UK | ANZ) that his jetsetting pilot father had picked up for him from a bookstore in America. I remember being impressed at its sheer size and being immediately drawn to both the cover (a glowing magic sword, what more could a thirteen-year-old boy want?) and the gorgeous interior illustrations by the brothers Hildebrandt. I forget what gushing eulogy my friend gave about the book, yet it was positive enough for the novel to stick in my mind. Faced with the horrors of a two-week family holiday a short time later, I purchased a copy of THE SWORD OF SHANNARA, thinking it might prove a decent distraction for a fortnight.

It didn’t – because I burned through the novel in two days. I was already a fan of fantasy, having devoured Fighting Fantasy gamebooks and the late Brian Jacques’s much-loved Redwall series, but this was the first time I’d read an adult book – and I was hopelessly smitten. I loved every page, every word. For hours at a time I lost myself in this mythical world, enthralled by the plucky heroes’ dangerous adventure to save the land from darkness. I may not have realised it at the time, but that reading experience was a watershed moment in not just my reading tastes, but my entire life.

THE SWORD OF SHANNARA cemented my love of fantasy; it’s the book I can trace my passion for the genre back to, where it all properly began. It gave me an appetite for epic fantastical adventures, which I sated by immediately devouring the rest of the original Shannara titles. I was delighted to find that they more than lived up to my expectations, each novel expanding the geography of Brooks’s world and introducing a host of new heroes and villains – from the enigmatic weapons-master Garet Jax, to the sinister Mord-Wraiths. Packing heroic sacrifices, epic battles and a strong sense of wonder, these books were not just a pastime or a diversion, but an experience. Terry Brooks is often credited with starting the post-Tolkien boom in epic fantasy literature (THE SWORD OF SHANNARA spent five months on the New York Times bestseller list upon its release), and it’s easy to see why – he is simply a master storyteller.

Fast forward fifteen years and not much has changed. I still love fantasy books and Terry Brooks still writes them. The Shannara series has grown and evolved over time, yet Terry still writes with the same passion and zeal that has been his trademark ever since THE SWORD OF SHANNARA. His new series, The Dark Legacy of Shannara, is no exception. Beginning with WARDS OF FAERIE (UK | ANZ) and continuing in the newly-released BLOODFIRE QUEST (UK | ANZ) this trilogy incorporates engaging characters, epic adventure and a sense of wonder that few other writers achieve in their work. In other words, everything I’ve come to expect and love in a Terry Brooks novel.
If you’ve never experienced the magic of Terry Brooks’s storytelling, now is the perfect time to start – as Terry will be visiting the UK in April! He’ll be signing copies of his books at London’s Forbidden Planet store. More information about the signing – and an exclusive competition – can be found here.

Terry Brooks is a master of the craft and a trailblazer . . . required reading” – Brent Weeks

“If Tolkien is the grandfather of fantasy, Terry Brooks is its favourite uncle” – Peter V. Brett 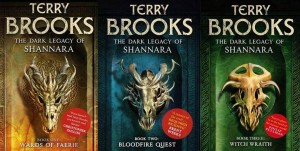