This month, we’re publishing THE CURVE OF THE EARTH (UK|US|ANZ) by Philip K. Dick award-winning author Simon Morden. It stars one of the best and baddest cybernetically-modified Russians around.

If you’ve not met him yet, super-genius Samuil Petrovitch sits on that fine line between man and machine. He is essentially still human, but having been rather blown to sh*t by an endless succession of people trying to kill him, he’s had more or less every body part replaced with robo-limbs. Not to mention his brain is awesome because he has an artificially intelligent, all-knowing computer uploaded into it. Pretty cool.

Being both a hero to the Freezone and public enemy number one to Reconstruction America, it’s sometimes hard to tell whether we should trust cyborgs to be our überstrong protectors, or melt their parts down for scrap metal before they destroy the human race. We took a look at some well-known cyborgs to find out.

Samuil Petrovitch: Angry; Russian; prone to swearing; has saved the world at least twice and is Reconstruction America’s enemy of the state. He has instant access to the Freezone information network that spans the globe, and can fly pretty much any highly complex aircraft the US military can create.

Plus, when his adopted daughter goes missing (yes, adopted, that’s how much of a good guy he is), he puts his own life in the firing line to save her. As long as you don’t mind sentences punctuated by expletives, we think Petrovitch is one of the good ones.
Verdict: Hero 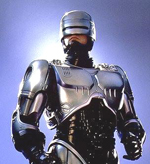 Robocop: Soon to be re-made starring Gary Oldman and Samuel L. Jackson, there is nothing not good about a partially-wounded cop being kitted out with full body armour to fight crime.
Verdict: Hero

Pearl Prophet in Cyborg – despite being totally slated by the critics (with some calling it ‘a bad, bad, bad, bad, bad movie’), this film starring Jean-Claude Van Damme went on to have two sequels, likely due to the fact that cyborg technology is brilliant, and the hope they could make it more interesting with a bit of Angelina Jolie action. Needless to say, they didn’t, so while the cyborg in the film wasn’t a bad guy, the movie made him so.
Verdict: Villain (though perhaps a description would be ‘non-heroic’)

Karl Ruprecht Kroenen (of Hellboy fame): This guy is so bad ass he turned himself into a cyborg. Anyone who thinks that cutting off their own eyelids is a good idea makes it into the bad books, not to mention the fact he’s a Nazi SS scientist with a clockwork heart. Clearly, he is incapable of doing good.
Verdict: Villain

Darth Vader: No list of cyborgs would be complete without mention of the classic melted-face director of the Death Star. Vader’s cybernetic enhancements are purely practical – he needs them to live rather than fight or do cool things – but he’s still one of the most incredible cyborg characters around. Despite the final tender moments he shares with his son, his wanton slaughter of minion after minion cements his place firmly in the villain camp.
Verdict: Villain

After looking at this list, bottom line is that while we could all use a Samuil Petrovitch on our side, you might do well to be wary of anyone getting into basement body hacking. At least for the time being…