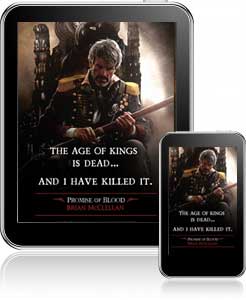 PROMISE OF BLOOD (US | UK | AUS) the debut epic fantasy novel by Brian McClellan will be out in only one more week! We’re thrilled by the response we’ve received for this new series launch, and one thing that keeps coming up is how much you all love the cover. And for good reason! Michael Frost (photo), Gene Mollica (illustration) and Lauren Panepinto (design) knocked it out of the park. Oh and here’s another fun fact: the model for Field Marshal Tamas was stunt double for Pierce Brosnan in the Bond films. How cool is that!?

So here is a set of wallpapers for your computer and electronic devices, and if you haven’t done so already, become a fan of The Powder Mage page on Facebook and read the first four chapters from PROMISE OF BLOOD early.