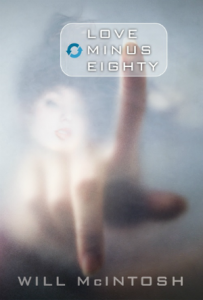 Since my first novel for Orbit Books deals with how the technology of the future has changed our most basic human relationships, I thought I’d pay homage to some of the great love stories in science fiction, be they in books, on film, or on TV.  Needless to say, these are my top five choices.  Your mileage may vary.

1. Desmond and Penny in Lost

There’s something about waiting for your true love that is especially poignant, that feels like undeniable proof of the power and purity of that love.  When Desmond tells Penny he’ll call her–in eight years–and eight years later Penny answers the phone, and they shout “I love you” into the phone, back and forth, back and forth, until the tenuous telephone connection fails, they had me.

In the darkest future imaginable, a woman Winston Smith barely knows slips him a note that says, simply, I love you.  In the lingo of the rom com, this is their meet, and it’s a beautiful one.  Their love is what ultimately leads to their downfall; they betray each other, and when they meet on the other side of re-education, their lack of feeling for each other is so incredibly devastating because their love was so convincing.

3. Joel and Clementine in Eternal Sunshine of the Spotless Mind

Joel and Clementine’s love is tumultuous, to say the least.  Clementine is a force of nature, wild and unpredictable.  She probably suffers from bipolar disorder.  Joel is tight, introverted, and private; yet when they fight, Joel’s words are, if anything, more cutting than Clementine’s.  They fight often, but somehow the passion in their arguments convinces us of the intensity of their love as much as their tender moments do.  They erase their memories of each other, yet meet and fall in love all over again.  These are two people who were meant to be together.

Mandella’s love for Marygay is the one and only touchstone in a life defined by senseless war and future shock.  He’s repeatedly thrown forward in time, a living anachronism, and it’s clear that if not for Maygay, his despair would consume him.  As with Desmond and Penny, Marygay shows the depth of her love for Mandella by waiting.  Only, instead of waiting eight years, she waits for centuries.

5. Seth Brundle and Ronnie, in The Fly

Another sure-fire sign of true love is sticking with someone through the bad times, and Ronnie sticks with Seth Brundle through some serious, serious bad times.  As Seth slowly disappears, and fly takes over, Ronnie continues to love what remains of Seth.  She proves her love again in the final act, when she’s there to end his suffering.

6. Mulder and Scully in The X-Files

Did I say five?  I meant six.  How can I leave out Mulder and Scully?  Their smoldering, always just-out-of-reach attraction is compelling because it’s so obvious, yet neither of them acknowledges it.  That they’re madly in love is evident in every conversation they have, whether it’s about UFOs, shape-shifters, or where to stop for coffee.  They’re utterly convincing as the ultimate opposites-attract couple, despite never quite becoming an actual couple.

So there you have it.  I know, I left out some good ones.  Feel free to let me know where you think I went wrong.

LOVE MINUS EIGHTY (US | UK | AUS) is available online and in stores now. Read the prologue on io9.