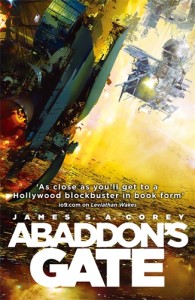 We’re thrilled to announce that ABADDON’S GATE (US | UK | AUS) is a New York Times Bestseller hitting the extended trade paperback list at #22. Congratulations to James S. A. Corey – the pen name of Daniel Abraham and Ty Franck.

ABADDON’S GATE is the third and latest installment in James S. A. Corey’s breakneck space opera that began with LEVIATHAN WAKES (US | UK | AUS). If you are a fan of science fiction and its subgenres, then you know that there are a thousand and one ways to die a horrible death.  James S. A. Corey breaks down some of the worst ways to go.

Classic Trek all the way, here.  Let’s face it, half the planets in the galaxy have some form on nasty energy monster on them, and they all kill in nasty ways.  Sucking out the iron from you hemoglobin, frying your nervous system, disintegrating you.  Your phaser won’t work on it.  But take comfort in knowing that the exact horrific manner of your death will give the important characters clues on how to defeat the creature.  So thanks for that.

The most famous examples (and still the best) are the monster in Forbidden Planet and Mr. Hyde.  The Id monster is someone else’s fault and your problem.  It’s not that is doesn’t want anything.  It wants to strip you into ribbons in a rage haze because of an unresolved Oedipal complex.  As you’re being ripped apart, you’ll know that this is happening because of unexpressed and unrealized frustrations of some other person, and knowing won’t help.  Kind of like working tech support, only literal.

Speaking of digestion, Jabba the Hutt claims that you digest in the belly of the Sarlacc for a thousand years.  Figure you die of thirst after three days.  That’s still a rough three days.

On the digestive tract theme, we have the infamous chest burster from Alien.  Which is worse, to wind up inside something else’s gullet, or to have a nasty xenomorph using yours as a uterus?  The birth will be even less pleasant than your mother claims yours was.

You spend forty years facing off with the scariest demi-gods, energy monsters, evil robots, and lizard men the galaxy could throw at you.  You beat them all with the patented double fist punch, a phaser set to kickass, and the ability to romance an evil alien woman till she died.  And then you’re taken out by poor walkway construction and the guy who played Caligula?  That ain’t right, brother.  That ain’t right.

4) Crushed by a spaceship

If you crash land on a planet that has a nasty life form that can’t stand light, three suns that create perpetual day, and an eclipse cycle that only makes it dark once every 22 years just a few hours before said eclipse begins, then the universe hates you.  Die knowing that you are the victim of thee most ludicrously improbable series of events of all time.

2) Ripped apart by things you should have killed from orbit

You are in a space ship.  The monsters live on a planet.  You don’t even need bombs or guns at that point.  Just throw heavy toolboxes out the airlock.  If you actually land and fight on the monster’s home turf, then every bad thing that happens to you is your own fault.  Speaking of which…

There should be a flashing neon sign next to the Earth warning aliens not to come here.  No matter how many spaceships you have, or how advanced your technology, or how physically superior you are, humans are just the nastiest creatures in the universe.  We’ll kill you with our cold germs, computer viruses, antiquated slug throwers, or baseball bats and glasses of water.  If movies have taught us anything, it’s that humanity is the universe’s favorite species.  With a combination of grit, pluck, and a plan so crazy it just might work, we will totally defeat your giant evil armada, or your pod replacements, or you mechanized assault troops.

Really, it’s your own fault for not just dropping tool boxes on us from orbit.