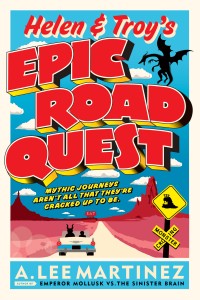 On cross-country road trip, a minotaur girl and an all-american boy will discover the adventure of a lifetime in HELEN AND TROY’S EPIC ROAD QUEST — a new comic fantasy by A. Lee Martinez! Publishers Weekly called it “a sweetly charming, gleefully entertaining tale of two teens traveling across the country, one mythic encounter at a time,” releases next week. Get ready to laugh out loud until your sides hurt and check out the first chapter!

The strangeness of a minotaur working at a burger joint wasn’t lost on Helen, but she’d needed a summer job. If she’d applied herself, she probably could’ve found something better, but it was only a few months until she started college, so why bother?

Fortunately Mr. Whiteleaf had been pretty cool about it. He didn’t make her flip burgers, and he didn’t make her stand out on the curb with a sandwich board as she’d feared he might. She usually ran the register, and while some customers might give her funny looks before placing their orders, that was their problem, not hers.

Full-blown minotaurism was rare in this day and age. Last time she’d checked, there had been thirteen recorded cases in the last hundred years. All the others were male. The enchantment or curse or whatever you wanted to call it usually didn’t take with girls. Not all the way.

The last full female minotaur, Gladys Hoffman, aka Minotaur Minnie, had made a name for herself as a strongwoman touring with P. T. Barnum’s Traveling Museum, Menagerie, Caravan, and Hippodrome. Gladys had made the best of her circumstances, but that was 1880. The world was different now, and Helen had more options. Or so she liked to believe.

She was still a seven-foot girl with horns and hooves, dozens of case studies in various medical journals, and her very own Wikipedia page. But she’d learned to roll with the punches.