So far we have talked about the first real step of a book, Acquisition, and then what goes into Cover Briefing. Then we let our minds wander and collected inspiration and formed Directions for the cover. Then we agreed on a Photographer and Illustrator. Now we need to find the star of the show, the Cover Model.

I’m going to let Kirk Benshoff tell you all about it, since he’s the one who found our star, and then we’ll hear from Bryce Bermingham, our favorite ninja, who also gave us an in-depth writeup below…

This shoot centered around having a martial artist. I needed someone who could rock a trampoline and execute some back flips, all the while not hurting themselves doing it. I can easily find models; finding a martial artist isn’t as easy as you would think. There aren’t any sites on the interwebs that focus on people who do martial arts for modeling.

I ended up finding someone in the New York City area who does fighting for film and stage, but his specialty was more European sword fighting and I needed someone who knew Eastern fighting styles for jumps/kicks and sword play. I was eventually given the name of Bryce Bermingham, a fight coordinator, stunt coordinator, actor, singer, and dancer who performs martial arts for film and stage.

It was funny — one of the first emails I received from Bryce had a picture of him doing a high kick that would have had me bed bound for a month. That picture alone gave me a good sense that this guy knew the fundamentals.

Ultimately Bryce knew exactly what I wanted. He understood the need for theatrics in order to have the “wow” factor in the final illustration. We had a great time going over the project, speaking at length about what I had in mind and what he could bring to the table. Bryce was eager to get into character, too, by reading the books, going with me to check out studios, and offering ideas.

Bryce came up with a “shot list” which is a list of moves we were aiming to capture on film by the end of the shoot day. For a photo shoot that has a lot of parts and potential for things to go wrong, Bryce really gave me a sense of comfort, knowing we were going in with goals. In the end he learned exactly what we wanted and how to do it. 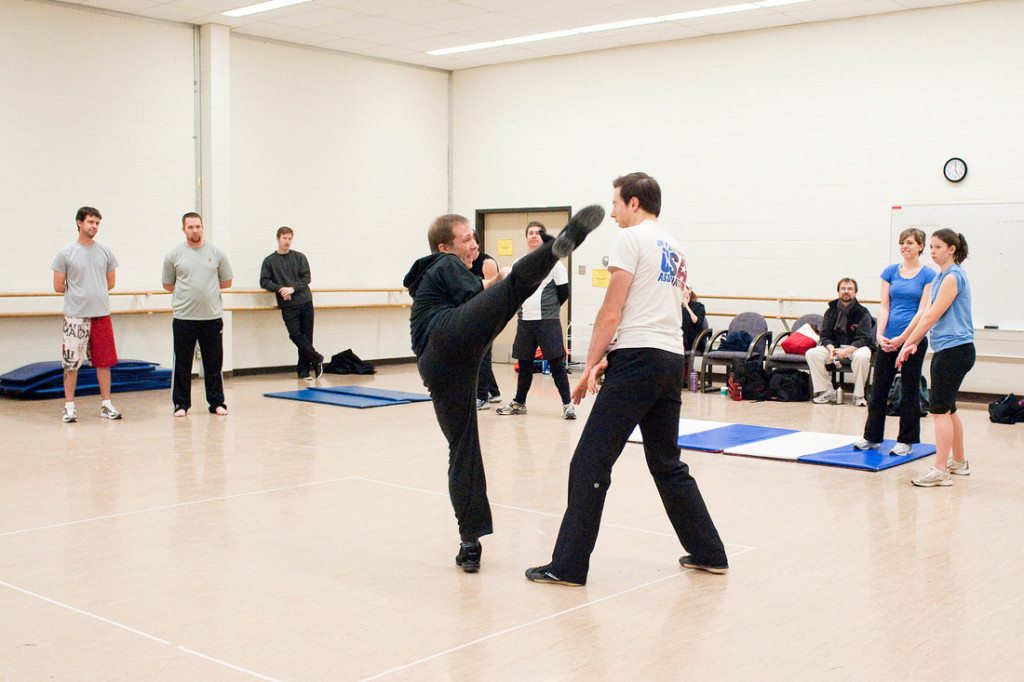 Now let’s hear from the star of the ninja show himself, Bryce!

As most things do in the times in which we live, it all started with an email. Orbit was looking for a model to grace the cover of 6 novels, three already written and three that soon would be. It was a simple thing that turned into an incredible experience.

The email asked me if I was interested in being the model for their books. I had come recommended by a friend of mine; they had seen my website and would like me to come in for a meeting. To be honest, I had never been on a photo shoot of this sort, and I didn’t know anything about the author nor one iota about Orbit. Thankfully the internet came to my rescue. I also reached out to several model friends to gauge what I could expect, figure out some questions I should ask, and solicit advice on what I should be wary of. I quickly discovered that Orbit was no small company and I drank in every word about the author, David Dalglish, and his incredible success story. Armed with that knowledge and the confidence that comes from being asked rather than having to ask for work, I went to our meeting.

From the moment I stepped into the offices I was amazed at the opportunity I was being presented with. Waiting in their foyer I saw rows of books, many that I had read and scores that were on my ‘to read’ list. When I finally met Kirk and Lauren they were as kind as could be. As we sat and discussed what they were looking for it became clear to me that they didn’t just want a model but a partner. They wanted me to have input and had a vested interest in the shoot’s success.

They patiently explained the process of how a book goes from an idea to a published work and how all the players come together to create the cover. They showed me a dozen or more pictures of the style of movement they were looking for, some of them other book covers, movie posters, or pictures of traditional Kung Fu movements, Chinese Opera, and dance. They were looking for a blend of a martial artist and a dancer—something with grace and lethality. They were not looking for bloody poses but something possessing a beautiful but deadly movement. We discussed how there should be motion in the pictures, a sense of flow. In my mind’s eye I began to see each move as an attack with the opponent just behind the camera. I felt each picture should be the moment before the kill. If the victim were to look up, this would be the last thing they see. We wanted to avoid the hard look of karate, of a finished punch.

I put forward to Kirk and Lauren that many martial arts moves are very similar to dance. For example, a crescent kick in martial arts is a fan kick in dance… and then of course, they wanted swords. This seemed like a dream opportunity for me, having started studying martial arts when I was 10, dance when I turned 18, stage combat at 23, and doing stunts at 25. I was excited to think that all my years of amassing skills were coming together for a single moment, and it certainly looked as if all the puzzle pieces were coming into place. I left the meeting ready to take on the world. I devoured the books and took notes every time the author talked about a moment of attack. I forwarded to Kirk passages of text I thought were particularly telling or descriptive in a way that would aid us in formulating poses and a shot list. Before long we had a list of 20 or so moves that we thought would work, Kirk found a great location, and the date was set!