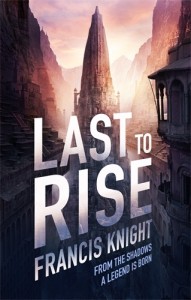 Ever since I decided to use Francis as my pen name, the subject has cropped up. Why? Is there some gender reason? Is it because you’re writing from a male first person perspective? In part that’s true – although Francis is a family name, which is why I chose it initially.

Writing as a supposed male has had some interesting side effects though. I’ve surprised a few people who thought I was male, which I’m taking as a compliment about getting the character right. And the other area that surprised me was the idea of author inserts, and the assumptions that come with that.

As a reader, I completely understand the temptation to assume a character (especially in first person) is, somehow, a representation of the author as they are, or who they wish they were. Perhaps because first person is so personal and you get so far inside the character’s head, that it’s difficult to see how they could possibly not be some sort of self-insert. Add to that, well, all characters have a little bit of the author in them, even if it’s only a tiny bit. I’ll admit that I do share a trait or two with Rojan – we’re both a bit cynical (him more so than me) and I, too, have a deep and abiding love of bacon. But that’s about it.

But the really strange thing I noticed was when people reading my books assumed that my own characters were self-inserts. Those who talked about self-inserts who thought I was male also thought that Rojan was, obviously, some sort of insert, or the guy I’d like to be. *Checks reproductive bits*. Um, nope. I think my husband might be a bit surprised if that were the case! And if I was a guy, would I really want to be Rojan? I can think of much more fun guys to be. Like, I don’t know, Thor or Captain Jack or someone. Not some poor schlep who’s just trying to survive to the end of the day without it hurting too much, and mostly failing in the “not hurting” department. I like the guy, but I wouldn’t want to be him. Or date him.

Those who knew that I was female thought that the self-insert was, clearly, my female gladiator, Jake. Nope again, although naturally we have the same plumbing. But I have, I like to think, much less psychological scarring, and very different attitudes to any number of things. We do both dye our hair, I’ll grant (though I was blonde when I first wrote her) but that’s about all we share. And a Mary Sue? A wish fulfilment character? Um, you did read the bit about the psychological scarring, right? Not to mention the physical scarring. I would not wish that upon myself.

All that has made me rethink my own assumptions that I make when reading. Maybe this is a hazard of the job, like RSI and a penchant for cats and people thinking you’re a bit strange when you stop everything to write down this awesome idea you just had, on the back of your hand if necessary. Because I make assumptions – we all do it to an extent, that’s how our brain works and we have to fight to overcome the tendency. That author writes awesome noble warriors, so the part of our brain that likes to make links thinks that the author must be a bit noble too, even if not a warrior. That author over there writes about twisted serial killers, so let’s not sit too close . . . Okay maybe if every guy I wrote was like Rojan, or every woman was like Jake, then maybe I’ve either got a bit of wish fulfilment going on, or maybe I just find certain sorts of characters fascinating. I’m a sucker for noble warriors and lovable rogues myself. That doesn’t mean I want to be one. If other authors always write women as X or guys as Y, then it might say something. But one character? One story/series? It’s just the story. Sometimes that story takes you in unexpected directions, and sometimes the characters surprise you. And I don’t know about anyone else, but I write these people precisely because they aren’t me.

But thinking all this has made me appreciate authors even more for the sheer variety of characters they write, and when I meet the authors it’s clear they are nothing like the people who inhabit their stories. I know I’ve certainly been very grateful none of those authors turned out to be homicidal.

That I know of.

Though I have my suspicions about that one guy . . .