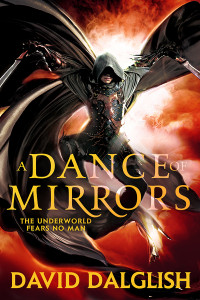 So I’m sure there’s at least a few people out there (or at least I’m going to pretend there is) curious about my transition from ‘self-publishing idiot’ to ‘an idiot being published by Orbit’. I should probably make something clear first. Coming in from self-publishing, I’d heard plenty of…let’s call it propaganda. Traditional publishing is evil! It’s the devil! They’ll buy your soul, run it through a paper shredder, make you change your characters into bland rip-offs of something else that’s popular, then feed your soul back to you in quarterly intervals. Also they’ll never do anything to help sell your books, treat you like scum, ignore your calls, and probably murder your puppy while they’re at it.

Now I’m sure there’s at least one puppy-murdering publisher out there, but I’d never actually quite bought into all of this. It’s one thing to believe a business is acting like, you know, a business, another to believe they were cartoon level villainy needing to be conquered by G.I. Joe. But even if I didn’t believe it, I still heard all the horror stories, the examples, the warnings… and it builds up a bit of an expectation. So after signing with Orbit and beginning the editing process, I’d be lying if I said I didn’t have any butterflies in my stomach as I got to peek behind the curtain.

Hardly helped that my editor, Devi, told me in her very first email that her goal was to make me cry upon receiving my edits (I’d like to put on record here and now, by the way, that she never, ever made me cry…panic attacks, yes, loathing my own story, yes, but no tears!). I prepared for the worst. I was waiting for orders to flat out toss various chapters, to rewrite character A from male to female, and to somehow add vampires. So when I got my first round of story edits back, I was surprised to find so much of it was…questions.

Why does this character act this way?

Why does this character contradict earlier behavior?

Which purpose does this plotline ultimately serve?

What is the connection between these two guilds?

WITHOUT INFODUMPING, what is this character’s actual plan? (and yes, that was indeed an all-caps command I received).

All my fears about having my novel forced to become something it wasn’t, or to make changes against my will, flew right out the window. Even despite my boneheaded decisions, or dropped plotlines, or inconsistent characters, Devi just pointed them out and then had the trust in me to fix them. Any longtime reader of mine that fears A DANCE OF CLOAKS’s rerelease won’t be as good as the original, you can stop worrying. No editorial mandates came down, demanding any specific solution to any perceived problem. Instead, I had to look to these questions, and if I couldn’t answer them, then I had to acknowledge that, you know what, perhaps I should try to see just where exactly I dropped the ball…

After pounding through the edits, I sent them back, all proud that my book was now so much better than it ever was when I first self-published it. Couldn’t wait to see what Devi thought. Couldn’t wait until my readers got their hands on this much improved story.

And then I get another email from Devi. Changes are great…but now it’s time for round two. More questions. More things that were still confusing. And my fixes and changes, some she loved, but some stuff, some things, well…

Out of everything, that’s what really hit me. When self-publishing, I am totally in control. If my editor (Derek, who is still awesome) said he wasn’t sure about something, and I disagreed…I didn’t have to explain it. I didn’t have to justify it. But suddenly, the “I’m the author” excuse wouldn’t fly anymore. If I wanted a character to behave a certain way, I needed to know why that character was behaving that way. I had to explain why it ran contrary to earlier behavior. I couldn’t look at a question of Devi’s, shrug my shoulders, and go “nah, that’s not a big deal” and continue on like I sometimes did with Derek.

I ran through the changes, kept adding more, tweaking, forcing myself to push my novel higher and higher. More and more I was learning to see my novel from an outside perspective, to attack it from as many angles as I could to ensure my story didn’t just shine, it friggin’ glowed. And all proud, and feeling like I really nailed everything this time, I sent the edits back to Devi.

And back to my inbox came round three.

I don’t know how atypical my experience has been, but so far I couldn’t be happier. Deep down, I truly do believe I have stories to tell that could mean something to a lot of people. Deep down, I also know I’m a lazy slacker who will let things slide, and is quite content with ‘good enough’. Working with Orbit has forced me to become a better writer, a better storyteller.

Because I don’t want to be just ‘good enough’.

My readers deserve better than that.

Today is an extra special day for Shadowdance fans and fantasy readers everywhere because we’ve got not one, but two new books for you to pick up.

The first is the Orbit release of A DANCE OF MIRRORS (US | UK | AUS), and the second is a all-new digital novella, CLOAK AND SPIDER (US |UK), chronicling the rise of the merciless Thren Felhorn. In A DANCE OF CLOAKS (US | UK | AUS), we meet a leader who is ruthless, cunning, and at the top of his game. Thren holds the city of Veldaren in his iron grip, but where did his journey begin? This collection contains contains six stories chronicling Thren’s tutelage under the fearsome Darkhand, his bloody rise to fame, the creation of his infamous guild, and the birth of his son, Aaron, who would grow up to be a legend all his own. It’s a must read for anyone who has ever rooted for the villain (because let’s face it: bad guys can be pretty awesome too).

Look for the other Shadowdance novels online and in stores now!