If you’re a fan of razor-sharp action, deadly intrigue and conflicted heroes – not to mention vivid, detailed worlds – then chances are you caught the huge buzz that surrounded the release of BLOOD SONG (UK | ANZ), last summer’s epic fantasy blockbuster.

The critical acclaim for Anthony Ryan’s debut was overwhelming, with even the mighty Buzzfeed chiming in to declare BLOOD SONG an ‘utterly engrossing high-fantasy epic from a major new talent.’ More recently, Amazon UK picked the book as their favourite SFF release of 2013.

The good news is that there’s more to come. A lot more. Next summer we publish Anthony’s incredible new novel TOWER LORD – and we can promise that if you thought BLOOD SONG was impressive, you’ve not seen anything yet.

Here’s the wonderful cover, courtesy of the combined talents of designers Nick Castle and Nik Keevil. 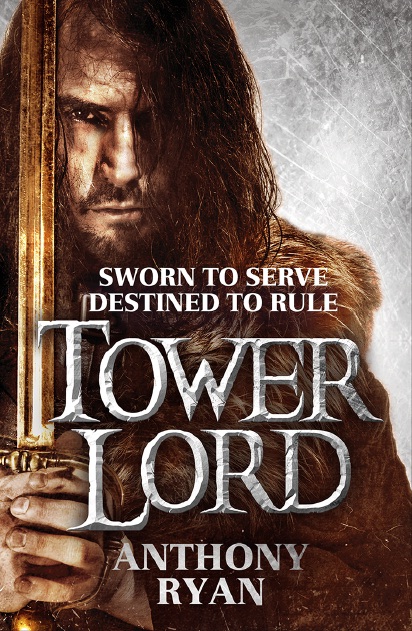 And here’s a taste of what you can expect in TOWER LORD (contains spoilers for BLOOD  SONG!):

Vaelin Al Sorna is tired of war. He’s fought countless battles in service to the Realm and Faith. His reward was the loss of his love, the death of his friends and a betrayal by his king. After five years in an Alpiran dungeon, he just wants to go home.

Reva intends to welcome Vaelin back with a knife between the ribs. He destroyed her family and ruined her life. Nothing will stop her from exacting bloody vengeance – not even the threat of invasion from the greatest enemy the Realm has ever faced.

Yet as the fires of war spread, foes become friends and truths turn to lies. To save the Realm, Reva must embrace a future she does not want – and Vaelin must revisit a past he’d rather leave buried.

TOWER LORD will be published on 3 July 2014 in hardback, trade format and ebook.