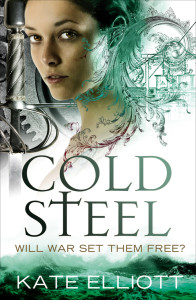 The Spiritwalker Trilogy is an epic fantasy coming-of-age-and-revolution in a gas-lamp setting written in first person from the point of view of a single character. While I really enjoyed writing in the voice of Cat Barahal, the single character first person viewpoint also presented challenges. For example, I could only ever see other characters as Cat sees them, and any incident that she does not herself personally witness she can only report on (or hear a report of) later.

As I finished up COLD STEEL (US | UK | AUS), the third in the trilogy, I decided to write a short story “coda” from the point of view of one of the other characters, Cat’s beloved cousin Beatrice (Bee). I also decided that because Bee is an artist I wanted the story to be illustrated. I’ve written about “The Secret Journal of Beatrice Hassi Barahal” elsewhere (extensively here where I talk in detail about the process of creating a chapbook with illustrations).

The artist Julie Dillon did a fabulous job with the black and white illustrations for the Secret Journal. I also commissioned her to do a couple of color pieces, more for my own selfish desire to have the illustrations than anything else (although we are talking about doing a limited edition print run).

Julie did two spectacular pieces based on passages from COLD STEEL.

One, “Rising from the Sea of Smoke,” was debuted over at A Dribble of Ink last week. You can see it there or on Tumblr. 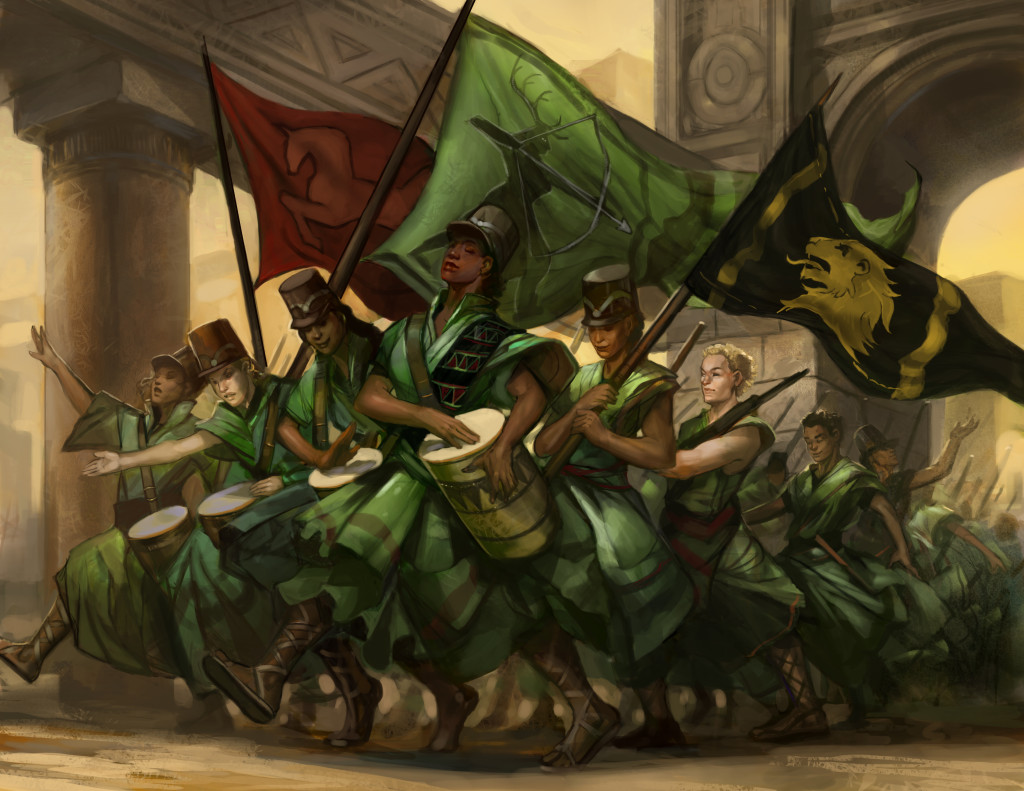 I asked Julie to illustration the following passage:

A gust of wind rattled the branches. A drum rhythm paced through the woods. On its beat I heard a woman’s voice call out a verse, answered by a chorus of women singing the response.

A column of soldiers marched into view, although they were almost dancing, so proud and mighty were they, and every single one a woman.

Four drummers led them while a fifth struck a bell, the drummers prancing and stepping on their way with every bit of flash and grin that any young man could muster. Their shakos were as jaunty as my own. All wore uniform jackets of dark green cloth piped with silver braid. Some wore trousers, while others preferred petticoat-less skirts tailored for striding. Most wore stout marching sandals laced along the length of calf, brown legs and black legs and white legs flashing beneath skirts tied up to the knee. Four lancers walked in the first rank, tasseled spears held high, while the rest carried rifles and swords. A banner streamed on the wind. It depicted an antlered woman drawing a bow.

Of the piece, Julie writes:

“I made the viewpoint lower to the ground so the viewer is looking up at them a little rather than looking down, which I thought might give them a somewhat larger than life feel. I also tried to make their poses and gestures, most particularly the arms of the amazons in the front row, have a nice flow of movement between them, to try to convey the sense that they are moving a little more energetically.”

Read the first chapter of COLD MAGIC (US | UK | AUS), book one of the Spiritwalker trilogy.