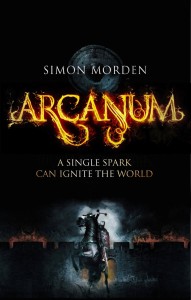 Today we are proud to release ARCANUM (UK | US | ANZ), a majestic standalone epic fantasy from none other than the Philip K. Dick award-winning Simon Morden.

Having won the prestigious award for his science fiction series starring deliciously sociopathic Russian genius Samuil Petrovitch, Simon has now turned his considerable intellect to fantasy. And what’s resulted is rather mind-blowing . . .

Imagine that long ago, the Roman Empire was crushed by wild spell-casting shamen.

Imagine that a thousand years later, a mighty kingdom has been founded on this formidable power – with magic their tool and their ultimate weapon.

The secret to Carinthia’s dominion is the Order of the Hexmasters, whose magic can power cities, build bridges and exterminate whole armies.

But then imagine taking this power away . . .

The twelve-year old Felix will be thrust onto the throne after his father’s demise, the fiery Nikoleta must wield her power carefully as the last remaining hexmaster, and the librarian Thaler believes that salvation lies in the knowledge stored in the great library of Carinthia . . .

Chaos and order, future and past, technology and superstition – all will clash with violence in the magnificent ARCANUM, out today.

‘A captivating novel as well as an interesting commentary on fantasy as a genre’ Tor.com

‘A masterful foray into an alternate universe . . . An engrossing rollercoaster of a plot winds up with a solidly satisfying climax that leaves the reader craving more’ Publishers Weekly

If you’re based in the UK and would like to celebrate the release with Simon and get hold of a signed copy, there will be a signing held at the Newcastle branch of Forbidden Planet on Saturday 15th February from 1-2pm.