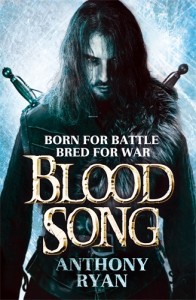 Next week we’re delighted to publish the paperback edition of BLOOD SONG, which in the UK was the bestselling epic fantasy debut of 2013.

Anthony’s Ryan’s powerful tale of high adventure and deadly intrigue clearly struck a chord with readers, as the critical acclaim that followed the novel’s release was nothing short of astounding. BLOOD SONG currently has over a thousand 5* reviews on Amazon and was selected as Amazon UK’s favourite SFF novel from last year.

With the hugely anticipated sequel, TOWER LORD (UK), looming on the horizon, now is the perfect time to read the epic fantasy blockbuster that took readers by storm last summer. You can find the first chapter here, and an interview with Anthony here.

And if that’s not quite convinced you, then here’s some of the praise that BLOOD SONG has received:

‘A top contender for most impressive debut of the year. . . A powerful epic’
SFFWORLD

‘This is epic fantasy at its best with action, rivalries, espionage, the promise of future revelations and ever-present twists’
BOOKBAG

‘An instant sensation . . . an excellent start to this series’
READ DREAM RELAX

‘Well wrought characters, a fascinating world, and crackling prose . . . Not to be missed’
KING OF THE NERDS

‘One of the next master storytellers’
FANTASY BOOK REVIEW

‘The next epic fantasy book everybody should read’
BLOTTED PAGES

Anthony Ryan lives in London and is a full time writer. You can find him online at his website and on Twitter.