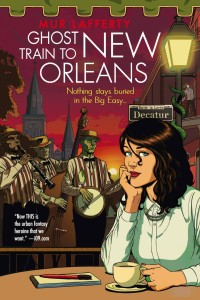 Last year, out-of-work travel writer Zöe Norris found herself in the Big Apple — looking for work and finding more than she bargained for.  Mur Lafferty’s THE SHAMBLING GUIDE TO NEW YORK CITY (US | UK | AUS)  is a hip and fun take on urban fantasy, which Cory Doctorow called “an unbeatable mixture of humor, heart, imagination and characterization.”

We’re thrilled to bring you the exciting sequel, GHOST TRAIN TO NEW ORLEANS (US | UK | AUS), which is available now!  Zoe and crew head south for an assignment in the Big Easy.

Since today is also Mardi Gras, it seemed appropriate to ask for Mur’s excellent travel advice on enjoying the celebration….if you’re a vampire that is.

The most difficult thing in New Orleans for vampires is accommodation. New Orleans is 8 feet under sea level, and graves and coffins and any sort of tunnel system are nonexistent. You must plan early to book a crypt, or find room in some of the hotels that feature sunlight-tight rooms. These hotels and the rentable crypts are often booked by November, so plan early.

Every city has laws specific to itself, for example, no earth demons welcome in Boston, and zombies must visit only downtown hospital morgues for brain retrieval. New Orleans is no different. Hunting can only be done in the cemeteries, all parties must be invite-only to limit the number of humans that try to attend, and the legally drunk limit is drinking one pint of blood that has a .10 blood alcohol content. So watch how many parting humans you partake of.

Do not dress in costume

Mardi Gras in New Orleans is the one time and place  where you can be yourself. You can dress in clothes that you find comfortable, even if they are from the 1300s, and you can avoid putting on makeup to disguise the paleness of your skin. Out and proud, that’s the chant of local vampires, as they proudly display all that they are this one time during the year.

If you attend the correct parades, you may have a chance to catch throws such as frozen blood cubes, candied brain bits, or hedgehogs. These parades are often late at night on side streets to not attract too much human attention. WATCH OUT: some hunters will throw rosaries and crucifixes at eager vampires looking to catch throws, so make sure you know what you’re asking for when you get your loot.

Ask before you participate

Many parades will allow you to join them, if you ask before the parade begins. Parades are a wonderful opportunity for all supernatural creatures to walk in the open with no disguises. Even larger creatures such as dragons and wyrms can pass themselves as floats in a parade. But do not join a parade as it’s moving along; the vampires in the parade may see that as a threat.

Since so many supernatural creatures fit in seamlessly with the chaos that is Mardi Gras, many sire vampires will use it as a “coming out” party or “Debutante ball” for their newest progeny. The baby vampires will likely still be hesitant to use their new powers, but most likely they will be excited for the opportunities to hunt and party and get drunk like they did in life. This means they will be more liable to step out of line, attract the attention of the authorities, accidentally kill a party attendee, or worse. It’s a fun, family-friendly event, but that doesn’t mean your children don’t need watching.

Thieves are wonderful, and Mardi Gras is full of them. They’re very good at what they do: lifting wallets and cell phones and the like. Thieves also make for very tasty pickings, as their blood is usually spiked with adrenaline, so after one attempts to rob you, capture him and take him somewhere safe (like the nearest graveyard) and feast away. The best part is, authorities will often look the other way if you can produce proof that you were only protecting the other humans. (Usually handing over the thief’s stolen goods will get you in the clear here.)

Remember what we said about accommodations? We have more vampires killed simply by being out all night and suddenly unable to find a safe place to hide when the sun comes up. And we’re talking old vampires, people who really should know better. But there is no better place to feed freely on drunks than Mardi Gras in New Orleans, and even the most cautious vampire can get in trouble if she has had a few too many tourists. You do not want to realize it’s 5am and your only sanctuary is a porta potty, which isn’t very light tight to begin with.

You can actively hunt in the graveyard, and even show many of your true colors to drunk humans who think you’re just kissing them roughly on the neck. Anything goes at Mardi Gras, which makes it an ideal vacation spot for vampires and other supernatural creatures. But when you step into the working part of the city, where there are fewer parties and more people just trying to enjoy an evening, you will stand out, and the authorities will notice you. Stay in the French Quarter, stay within the invite-only parties, and stay within the cemeteries.

Read an excerpt from GHOST TRAIN TO NEW ORLEANS or start from the beginning with THE SHAMBLING GUIDE TO NEW YORK CITY!