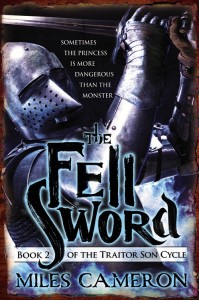 “Do well. Act with honor and dignity. Not because there is some promised reward, but because it is the only way to live.”

Today we are excited to release the long-awaited THE FELL SWORD, Miles Cameron’s epic sequel to THE RED KNIGHT. THE FELL SWORD is the second book in the Traitor Son Cycle, published by Orbit in the US and Gollancz in the UK. This second volume has all the action and intrigue that delighted fans and critics alike in THE RED KNIGHT, only now the stakes are higher than ever as the pursuit of honor falters against a backdrop of vicious battles and betrayals. Here’s what THE FELL SWORD has in store:

Betrayal, on the other hand, is free.

When the Emperor is taken hostage, the Red Knight and his men find their services in high demand — and themselves surrounded by enemies. The country is in revolt, the capital city is besieged and any victory will be hard won. But the Red Knight has a plan.

The question is, can he negotiate the political, magical, real and romantic battlefields at the same time — especially when he intends to be victorious on them all?

“A medieval-fantasy at its finest … If you’re a fan of characters that are incredibly realistic and battles that put you right in the sweaty, gritty action, this is a book for you.” – Fantasy Faction on The Red Knight

Read an excerpt from THE FELL SWORD or start from the beginning with THE RED KNIGHT! And for a bit of extra fun, watch what happens when an epic fantasy novel and an armored knight go up head-to-head.