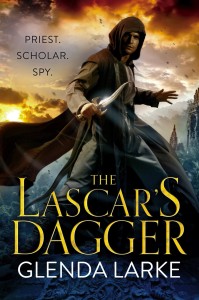 Saker appears to be a simple priest, but in truth he’s a spy for the head of his faith. Wounded in the line of duty by a Lascar sailor’s blade, the weapon seems to follow him home. Unable to discard it, nor the sense of responsibility it brings, Saker can only follow its lead.  The Lascar’s dagger demands a price, and that price will be paid in blood.

THE LASCAR’S DAGGER (US | UK | AUS) is the first book of an brand new trilogy by Glenda Larke. Get to know Glenda and find out what her new series is all about in the interview below.

1.) When did you first start writing?

I was still in elementary school when I discovered I could write stories and – better still – I could persuade other kids to listen to them. When a teacher asked us what we would like to be when we grew up, my reply was ‘an authoress’!

2.) What made you want to write fantasy?

My first novel (unpublished!) was actually not fantasy at all. It was a thriller with a strong dash of romance, set in Malaysia, where I was living at the time. I showed it to someone, and to my alarm discovered that she equated the main character’s views with mine simply because the main character was, like me, an Australian living in Malaysia. I figured that the book – if ever it was published – would get me into trouble with the community I was living in at the time, so I shelved it and turned instead to writing fantasy. After all, no one was going to equate me with a woman born in the Keeper Isles and living in a place called Gorthan Spit, were they? (It was no hardship switching genres, of course. I loved reading fantasy and it makes sense to write what you love.)

3.) Who are some of your major influences in the genre?

It’s hard to single out any particular book or writer. I suspect it was Susan Cooper’s ‘The Dark is Rising’ that started me reading fantasy in the first place. The authors I read in the 1980s as I was developing my skills as a writer of fantasy were people like Barbara Hambly, Janny Wurts, Guy Gavriel Kay, Raymond Feist and Ann McCaffrey.

4.) Where did the idea for The Lascar’s Dagger come from?

There’s never a single idea! If I had to sum up the sources for my inspiration, I’d say: the great port cities of the Netherlands and the U.K. in the time of sailing ships, my mother-in-law’s kitchen, the Malay dagger, my ancestor sailing around the world on Captain Cook’s ‘Endeavor’, the spice trade, my husband’s background, privateers, birds of paradise…

The Malay/Indonesian dagger, with its distinct wavy blade, is part of my husband’s culture. Called a kris, it is a traditional weapon of his people, and historically it was thought to contain a spirit or presence (which can be good or evil). Folk tales often tell stories of a kris with magical powers. What fantasy writer can resist the idea of that?

Most of the trilogy, though, is set in my version of Europe about to embark on colonial expansion and trade dominance of the East. There’s a bit of a twist on our history, though: in my books, the East has a novel way of fighting back…