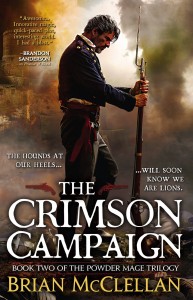 Vlora resonates with readers because she is complicated and conflicted, her most important relationships destroyed by a single mistake just before the start of Promise of Blood. Next to Taniel and Tamas, she is one of the most gifted Powder Mages in the world. In The Crimson Campaign, we get to discover her side of the story and see her in action.

I love writing Ricard Tumblar because he’s a conglomeration of a dozen different people I’ve known throughout my life. He can come off as absentminded and even bumbling at times, but he’s the head of the biggest labor union in the Nine Nations. He has impeccable business sense, he thinks and acts larger than life, he’s ambitious and even a little bit greedy. But he’s also generous and thoughtful and, though he can’t maintain a marriage to save his life, he is one of Inspector Adamat’s oldest and most faithful friends.

Ricard has bigger plans in The Crimson Campaign. He’s shooting for the stars in ways that Adamat could not have guessed and it may cause more problems for our beleaguered inspector…

Fell is a new character in The Crimson Campaign. She’s an undersecretary in the Holy Warriors of Labor, and assistant to Ricard Tumblar. Her broad, highly developed set of talents make her an invaluable part of Ricard’s staff. I think you’ll like her. To say any more might spoil fun!

For news and updates about THE CRIMSON CAMPAIGN become a fan on Facebook!