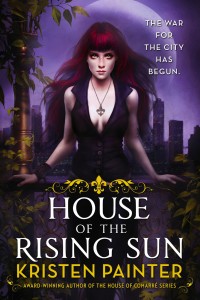 The Trouble with New Orleans

Just say the words New Orleans and you probably think of jazz music, cobblestone streets, cemeteries filled with monuments, and scrolling iron balconies. You might also think about vampires, ghosts and who knows what else that might be lurking in the shadows. The Big Easy has a certain reputation for the mysterious. And indeed, it is definitely a place filled with a special kind of magic. The tales that surround this city are part truth, part legend, part good old fashioned story telling.

As a writer, it’s hard not to be mesmerized by this place. I’ve been to New Orleans more times than I can count and it never fails to enchant me in some new way. There are moments when I could easily believe I’ve crossed a threshold where all the creatures of my imagination could truly exist. Maybe it has something to do with the city’s own sense of immortality. Very little changes here, whether it’s the architecture, the colorful presence of art and music, the tantalizing aroma of chicory-laced coffee, or the ever-present sense that an undercurrent of something dark and magic thrums just below the surface.

I promise it’s nothing to be intimidated by. The locals are friendly and the tourist even more so, perhaps helped by the loose liquor laws. Whatever the reason, the city welcomes everyone and has become a favorite for so many authors, myself included.

In my new Crescent City series, it became the perfect setting for my fae characters. A place where mortals and othernaturals could indulge in food, drink, music, love, and war, all while fully aware of each others’ existence.

If you find yourself in New Orleans and want to check out some of the places where the lines between this world and the supernatural seem to blur, take this list with you. A few of these spots show up in my series.

The cemeteries of New Orleans

Sometimes called the Cities of the Dead because their towering crypts and monuments create mini-skylines, a stroll through any one of these final resting places is something you’ll always remember. My favorite is Lafayette Cemetery No. One in the Garden District and conveniently located across from Commander’s Palace restaurant. Both spots make an appearance in, HOUSE OF THE RISING SUN (US | UK |AUS), but the cemetery gets top billing as it’s also the location of the fae’s underground headquarters (via a secret entry through one of its crypts).

Hard to believe this quiet, reverent place is just steps from the constant party of Bourbon Street. But this gorgeous building is such an amazing location, I had to write it into my book as the place my hero’s mother took refuge. Not only one of the few remaining examples of French Colonial architecture, the Convent has been both an orphanage and a school for girls (a usage it’s returned to in House of the Rising Sun). Walled off from the rest of the French Quarter like its own little domain, it’s easy to understand how tales arose that vampires were once held prisoner in its attic.

Lafitte’s Blacksmith Shop is probably one of the most famous with its long, haunted history that includes its namesake, the dread pirate Jean Lafitte. Story has it, he apparently planned many of his capers here.

LaLaurie House is one of the most gruesome and has a genuinely terrifying past. The house’s original owner, Madame LaLaurie became infamous for her torture and mutilation of slaves. (Kathy Bates resurrected her on American Horror Story: Coven.)

Lastly, there’s the Hotel Monteleone, which also makes a guest appearance in my series. This joint has a crowd of ghosts that include kids, guests who never made it out of the hotel alive, and the spirit of the guy who built the Grandfather clock in the lobby. It’s said you can occasionally see him working on it.

As coincidence has it, the hotel sports the French Quarter’s only rotating bar. With the bar’s long history of inventing cocktails, it’s no wonder such authors like Ernest Hemmingway and Truman Capote made this one of their hang outs when they were in town.

If you stop by, you might get to see them still hanging out there. How could I not write about this city? It’s the most amazing place and really, that’s the trouble with New Orleans. No one ever wants to leave.

Take your own trip to New Orleans in House of the Rising Sun, out this week, and read the prologue here.