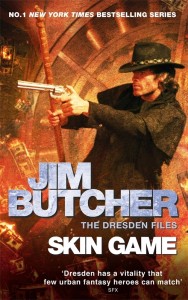 The day that Dresden fans have been waiting for is finally here: SKIN GAME, the latest thrilling adventure starring Harry Dresden, comes out in hardback, ebook and audiobook today!

Harry Dresden, Chicago’s only professional wizard, is about to have a very bad day. As Winter Knight to the Queen of Air and Darkness, Harry never knows what the scheming Mab might want him to do. Usually, it’s something awful.
This time, it’s worse than that. Mab’s involved Harry in a smash-and-grab heist run by one of his most despised enemies to recover the literal Holy Grail from the vaults of the greatest treasure horde in the world – which belongs to the one and only Hades, Lord of the Freaking Underworld.
Dresden’s always been tricky, but he’s going to have to up his backstabbing game to survive this mess – assuming his own allies don’t end up killing him before his enemies get the chance . . .

Still not convinced you need some more Harry Dresden in your life? Read the SFX Magazine review of SKIN GAME, listen to an audiobook sample read by James Marsters (yes, that James Marsters) or watch the amazing fan-made book trailer now!