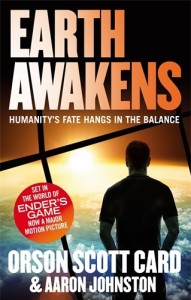 Today we release EARTH AWAKENS (UK | ANZ) the third novel in the stunning First Formic Wars series. Co-written by Orson Scott Card and Aaron Johnston, it tells what happened in the run up to the events in the bestselling classic novel ENDER’S GAME.

I love this series – it’s just so readable. And not just for all those people who are already big fans of the Ender books. It also works as a fast-paced science fiction adventure in itself. The story just whizzes by and the action doesn’t let up at any point. It’s fascinating to see how humanity’s strategies develop in our first hostile encounter with an alien race.

This latest book has already been receiving some very high praise, with Publishers Weekly claiming:

Check out the copy below, and look out for EARTH AWAKENS in stores now.

TIME IS RUNNING OUT FOR HUMANITY

It is one hundred years before the events of Ender’s Game. Tens of millions are dead in China as the invading Formics scour the landscape and gas cities with a lethal alien chemical. Young Mazer Rackham and the Mobile Operations Police scramble to find a counteragent, while asteroid miner Victor Delgado infiltrates the alien ship in near-Earth orbit.

Victor needs to find a way to seize the ship and end the war, but he’ll need a small strike force of highly skilled soldiers to pull it off. In this last-ditch effort to save what’s left of humanity, Mazer Rackham and his team may be just the men for the job . . .