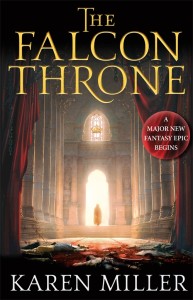 This week sees the start of a truly epic new fantasy series. Some of you may know Karen Miller already from her bestselling Kingmaker, Kingbreaker series, which begins with THE INNOCENT MAGE, and led to her selling over a million copies to date worldwide. But this novel marks the start of a brand new stage in her writing career. This novel is on a bigger, more epic scale than anything she’s ever written before, and it just blew us away here at Orbit with its brilliance. THE FALCON THRONE (US | UK | AUS) is the tale of an unquenchable thirst for power – of the atrocities people will commit in order to obtain it, and the consequences for those who stand in their path. It’s an epic fantasy that is magnificent in scope, thrilling in its emotional power, and truly something that every fantasy fan should read.

It’s on offer for a very limited time, so now is a good time to check out the start to this series, which is sure to be hugely influential in the fantasy world. Congratulations to Karen on writing such a knock-out novel!