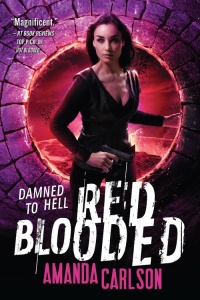 Jessica is going to Hell.

After settling a fragile truce between the vampires, werewolves and witches, the last thing Jessica wants to do is face the demons head on. But when the Prince of Hell kidnapped her brother, he set into motion a chain of events that even Jessica doesn’t have the power to stop.

Now, Jessica must go into battle again.  But Hell is a whole new beast — new rules, more dangerous demons, and an entirely foreign realm.  And when Jessica is dropped into the Underworld too soon, without protection or the help of her friends, she must figure out just how powerful she can be… or she will never make it out alive.

Since FULL BLOODED (US | UK | AUS) hit shelves in 2012, Amanda Carlson has kept readers on the edge of their seats, following Jessica’s adventures as she has struggled against werewolves, witches, vampires, and fate that is not to be denied.  But RED BLOODED (US | UK | AUS), book four in the non-stop action Jessica McClain series, brings the series to a whole new level. Describing a Hell as you’ve never seen before, Amanda Carlson hits shelves with her best book yet, immersing the reader in a world where nothing is familiar and anything goes.  With the help of some new and possibly reliable allies and a blast from the past that should not be missed, fans will not want to miss this latest installment!

And if you are not familiar with the Jessica McClain series, never fear!  You can check out a sample chapter here, and we are currently doing a Goodreads giveaway of book one — a perfect way to jump in and invest in this great new series that you are bound to love.  Head on over to Goodreads now and check it out!

Praise for the Jessica McClain novels:

“Carlson has crafted a real roller coaster of a book and series!”—RT Book Reviews

“Amanda Carlson’s debut novel is a fast-paced tale with a cliffhanger ending that left me panting for more. Full Blooded left me on the edge of my seat from cover to cover.”—New York Times bestselling author Faith Hunter

“A wild, wolfy ride that will have you howling for more!”—Kristen Painter, author of Blood Rights