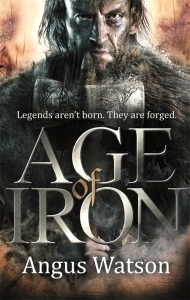 My Orbit-published epic fantasy trilogy AGE OF IRON is set in Britain during the . . . you guessed it . . . Iron Age. After looking around for about twenty years, I learnt about Britain in the Iron Age and I’d knew I’d found the perfect place and time to set a novel. Here’s why.

The Iron Age ran from roughly 800BC to 43AD, so was relatively recent. Your great times ninety grandparents might have been running around then. The Age of Iron trilogy is set near the end of the period, between 61BC and 54BC.

This period of history was much busier than most would think. There were roads, towns and massive hillforts all over the country. However, we know almost nothing about it because the ancient Brits didn’t write and in 43AD – a hundred years after my book is set – the Romans invaded successfully, stayed for 400 years and wiped out any oral histories. The pre-Roman population was pretty big, the estimates range from one to three million, so there were loads of people, and they weren’t cavemen who sat around saying ‘ug’. They were men and women like us – full of wit, passion, inquisitiveness, jealousy, anger, love and so on. So, throughout the long Iron Age, there must have been epic love affairs, huge wars, intrigues, trysts, adventures, disasters and more, all of which we know absolutely nothing about, which, for me, screams out an invitation for us to create stories to fill the void.

It was a massive joy to learn as much as I could about the period and then make up a world and people to fill it. Anyone else can walk up a hillfort and do the same (see point five for the best hillfort to do this on).

The best weapons for a fantasy hero to wield are ones that he or she can really wield. So that’s swords, axes, maces and, greatest of all, hammers. And what’s the best material to make these from? In the real world, where AGE OF IRON is set, ancient melee weaponry can be stone, bronze, iron or steel. Stone is thuggish. Bronze is effete and shiny. Steel is too clean and perfect. Iron, however, is earthy, tough and brutal with just a hint of brittle. If the four main ancient weapon materials were superheroes, stone would be the Hulk, bronze would be Spider-Man, steel would be Superman and Iron would be Batman. Some may disagree, but out of those four I’d always rather write a book, or read one for that matter, starring Batman. So it’s a result that, during the Iron Age, weapons were made of Batman.

I’ve had a few scary moments in my 42 years. One was maybe 10,000 feet over Indonesia’s Lombok Straight, when the cabin of the small, elderly plane filled with smoke. Another was getting lost SCUBA diving at night, underwater, in a cave, 600 miles from the coast of Australia. Just as scary as both of these was being chased by stampeding cattle across a field in Wiltshire. Up close, when they’re running full tilt, your average modern farm based Hereford cow is massive, powerful, and, if you’ll pardon the expression, fucking terrifying.

Roaming the forests of the British Iron Age were much bigger, wild cows called aurochs. They were 2m or 6ft 6in high at the shoulder and each weighed as much as a hippopotamus. Their horns, pointing forwards from an enormous head, were three feet long and as wide at the base as telegraph poles.

So if you’re writing a reimagined, fantastical account of Caesar’s invasions of Britain and you need something for your heroes to ride into battle against a battalion of war elephants . . . well hello, herd of armoured battle aurochs.

There are approximately two billion Christians in the world who believe that, in around 33AD, a chap called Jesus of Nazareth walked on water, fed five thousand with a small basket of food and brought another man, and himself, back from the dead. AGE OF IRON is set sixty years before Jesus was born, so it seems perfectly reasonable that a few British druids back then were able to perform similar feats of magic.

One of my favourite books is WATERSHIP DOWN, and it pleases me greatly that you can go to the real world Watership Down and see where the book took place – the copse where Hazel founded the new warren, Nuthanger Farm, Efrafa and so on.

You can also visit the locations from AGE OF IRON. Best of these is Maidun Castle, which, in the real world, is called Maiden Castle (I really let my imagination go on that one). Maiden Castle is just south of Dorchester in Dorset and totally open to the public. Its walls and ditches are massive and imposing now, but in the Iron Age they would have been steeper and deeper, and, with the top-soil removed to reveal the chalk rock beneath, the whole thing would have been blinding white in the sunlight, and topped with a mighty spiked wooden wall.

Park in the handy car park, walk up through the labyrinthine western gate, look around the interior, walk a circuit of the walls, and, if you’re anything like me, be totally blown away contemplating all that might have gone on in the hundreds of years that this humungous fortress, at least twenty times the size of any medieval castle, was stuffed full of men and women chatting, playing sports, arguing, fighting, repelling invaders and doing whatever else it was that they did.

A Tale of Two Hillforts

To sum up, it’s difficult to see why you wouldn’t set your novel in Iron Age Britain, and it’s a surprise that so many great writers have missed the chance. Luckily AGE OF IRON is first in a trilogy, so once you’ve got your fix from that one there’s plenty more to come.