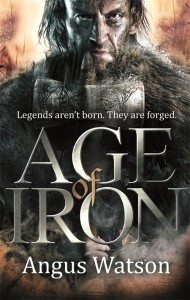 Angus Watson, author of debut epic fantasy AGE OF IRON – the first book in a rip-roaring trilogy of Iron Age warriors fighting off the Roman invasion of Britain, outlines five moments in history which could have gone very differently . . .

We should all be speaking Latin.

Julius Caesar’s first British invasion force in 55BC was the same size as William the Conqueror’s in 1066 – around 10,000 men. It stayed in Britain for just a few weeks. The second one in 54BC was two and a half times the size, but it returned to France after a few months. No Roman legionary set foot in Britain after that for a hundred years.

The accepted historical take of Caesar’s invasions is that the Romans won every battle and returned across the Channel victorious, twice. This version comes entirely from Caesar’s own diary and is clearly absolute bollocks. He didn’t come to Britain with 25,000 soldiers for a summer holiday and he didn’t leave because he was winning too much. He intended to conquer. He should have been able to. His army had overthrown all of France in two years. Something big happened to stop him.

My Orbit trilogy AGE OF IRON is a fictional, fantastical account of how an unlikely gang of Brits united to hand Caesar’s invincible arse to him. Had Caesar’s invasions succeeded, then the Romans would have had Britain for a hundred years longer. The extra resources might have enabled Rome to conquer all of Germany, Arabia and then the rest of the world, and the Roman Empire might never have fallen . . .

This blog post looks at four other events in history that really should have gone the other way, resulting in a completely different world today.

What should have happened: Assyrians destroy Jerusalem

Which would mean: No Jews, Christians or Muslims

In 701BC the Assyrians were the badass super power. They’d conquered everyone around and their army was parked outside the gates of Jerusalem, ready to smash yet another walled city. Inside Jerusalem were the Israelites, the only believers in Yahweh, the deity who would grow up to become God for Judaism, Christianity and Islam.

Back then, if people conquered you, you forsook your own gods and adopted theirs for the sensible reason that their gods had proved to be more powerful than yours. So things were looking bleak for Yahweh / God.

However, just before the big assault, something devastated the Assyrian force and Jerusalem and God were saved. The Hebrew bible says an Angel of the Lord slew 185,000 of the besiegers. Less religious-minded modern historians reckon it was a plague or an army from Africa that did for them. Whatever it was, something massive and unexpected happened, without which there’d be no God, Jesus, Allah, crusades, Pope, nine eleven, vicarages, hijab, jihad, etcetera etcetera etcetera.

What should have happened: The Spanish Armada smashes the Royal navy, Spain conquers England

Which would mean: USA speaks Spanish, no British Empire

In 1588 the little English navy, comprised entirely of adventurer pirate captains and loot-loving crew, pissed off Spain one too many times and King Phillip II decided to invade Queen Elizabeth’s island. He gathered his vastly superior army in Holland and sent his massively more powerful navy to clear the Channel for the transport ships to whip the troops across. It really should have been a doddle. Spain should have conquered England in 1588. Two things went wrong.

First, the fiercely capable admiral of the Spanish fleet died and Philip replaced him with an idiot who had no military experience. The lighter British ships sailed circles around the heavier Spanish boats, popping away with their less powerful but longer range cannons. The Spanish could and should have pushed the English boats into a place where the heavy, short range Spanish cannons would have pulverised them, but they didn’t.

Second, the wind changed, enabling the English to set fire to eight ships and sail them at the anchored Spanish fleet. The Spanish panicked and fled. Because of the wind direction, they had to go north around Scotland, where most of them were destroyed by storms. The English navy, cocky from victory, grew and won the largest empire the world has ever seen.

What should have happened: Annie Oakley kills Kaiser Wilhelm II

Which would mean: No world wars

In 1891, a small, 31 year-old American sharpshooter named Annie Oakley was one of the most famous people in the world. Touring with Buffalo Bill’s Wild West Show, her amazing skills with rifle, pistol and shotgun were seen by countless thousands. Queen Victoria was a big fan.

In Germany, Kaiser Bill saw her shoot the ash off a cigarette in her husband’s mouth and insisted she did the same to him. She refused initially, but went ahead on the condition that he held the cigarette in his hand. The display went without a hitch. Had the Kaiser kept the fag in his mouth and had Annie’s shooting been off by an inch or two, the warmonger’s head would have been blown off and there would have been no world wars, or at least they would have been utterly different.

When war broke out in 1914, Annie wrote to the Kaiser, asking him if he wanted to try the trick again. He didn’t.

What should have happened: America surrenders to Japan

Which would mean: A new world order

There’s a story that students at the US naval college at Anaheim have never managed to win a simulation of World War II’s Battle of Midway. In reality, only a couple of massive pieces of luck enabled the hopelessly outgunned Americans to emerge victorious. Had they not, the Japanese navy would have ruled the Pacific, their aircraft carriers would have taken Hawaii and been able to attack the US western seaboard unimpeded, and things would have been very different. The US might have surrendered and they certainly wouldn’t have been able to send so many men and machines across the Atlantic to fight Germany. Hitler would probably still have been defeated, but solely by the Russians, who would have marched on through Berlin and taken all of Europe.

The first stroke of luck was a childishly simple Japanese code, which the US cracked with ease. So they weren’t fooled by the Japanese dummy message encouraging them to sail north to the Aleutian Islands. Instead, they headed for where the Japanese fleet was massing near the Midway Islands (bang in the middle of the Pacific, as you might expect).

Second, a patrol of US dive bombers was about to run out of fuel and return to base when they spotted the Japanese fleet. Five minutes later, with masses of luck and, let’s be clear here in case any American readers think I’m taking this too lightly, a great deal of skill and heroism, US dive bombers and a submarine had sunk three out of four Japanese aircraft carriers. The forth was destroyed shortly afterwards and the tide of war was turned.

The third piece of luck was some astonishing Japanese ineptitude. Despite having many more planes, they sent no reconnaissance and in four days of battle never found the American fleet. Worse, when the first three aircraft carriers were spotted, all the Japanese planes were on deck, fueled, armed and ready to take off. They could and should have defended the mother ships with ease, but the order to take off was never given and they all sank together.

If any of these three factors – the code breaking, the lucky sighting of the fleet, the inexplicably poor Japanese tactics – had been different, we’d probably be speaking Russian in the UK today and Americans would be eating even more sushi.