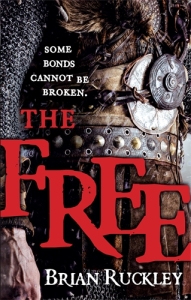 Brian Ruckley, author of THE FREE – a rip-roaring tale of action and adventure – talks about magic systems, and why they’re completely unnecessary. Except when they’re not.

While I was doing the interview I did here the other day about my new book THE FREE, I left out a heap of stuff. Because you always have to leave stuff out, right? But there were a couple of topics I’d like to have kicked around a bit more, and here’s one of them: magic systems.

Role-playing games have to have their magic systematised to some degree – defined, constrained, structured, all that – because otherwise the whole thing would get messy fast. But what’s the deal with magic systems in fantasy novels?

The fantasies I loved as a kid did not, as best I can recall, generally define what magic was or how it worked in any detail. In most of those books, magic was an immanent property of the world, or of individuals, or objects. It was just there, inherent in certain people or places or things. A capacity for change that was kind of unspecified, and with inner workings that remained entirely invisible.

Which, I tend to think, is the natural state of magic in fantasy novels. Why would we want to have this stuff explained and circumscribed? The ‘magic’ of magic is in its numinous quality. We don’t need to know the mechanics of it all. That’s not really the sort of awe-inspiring otherliness and wonder we’re after in fantasy. It’s engaging the wrong bit of our brain. Look what happened when Mr. Lucas tried to escape the clutches of fantasy by midi-chlorianising the Force. He gently systematized his magic, and much wailing and gnashing of teeth ensued.

So, naturally, having said all that, I’ve got a bit of a magic system in THE FREE. As you’d expect, I have reasons (excuses?) – aside from the basic one that I’ve got a brain that tends to see, and look for, systems and processes in the world around me generally.

First up, there’s the notion of having your approach to magic fit with the tone of a book. With THE FREE, I was shooting for a fairly hi-octane adventure vibe, with grounded characters making tough choices in psychologically plausible ways. It just felt consistent to have some structure to the magic that both reader and character could grasp and – to some extent – anticipate.

Of course, I decided I could have my cake and eat it too, because I didn’t want to lose the element of surprise and wonder and pyrotechnics that magic can bring. Thus, those who use magic in THE FREE (I call them Clevers) are theoretically capable of doing almost anything. Everything – physical and non-physical, every single aspect of the world – can become a part of magic, and that makes it both immensely powerful and almost infinitely varied. So although there is a sort of rationale for what’s happening and why, it’s not a prescriptive, circumscribing one.

Second up, there’s magic as an engine of plot, story, character. I figured that if I was going to have a magic system, it might as well help me as a writer, so I tried to come up with one that by its nature embodies some tension and conflict and climax.

I said Clevers are theoretically capable of almost anything in THE FREE, for example, but it’d be a brief story if that was how it worked in practice, right? In practice, magic in the book is constrained by the physical and mental price a Clever is willing or able to pay for its use.

This makes both characters and reader aware that sacrifice is always potentially on the horizon. When things start to go downhill, both characters and reader are aware – they anticipate – that there might be a way out if someone is willing to pay the price. So who – which one of your friends – is going to do it? How? And just how much will they pay? It adds a certain double-edged tension to the relationships and the situation, I think.

I capped off the magic system with a little flourish called Permanences. These are the worst case scenarios of magic use in the world of THE FREE. Unpredictable, born out of failure and death, outrageously powerful. They’re there, above all, because I think they’re kind of fun, and scary, and dramatic (and that, of course, is the best reason for doing anything as a writer). But also because an understanding of how the magic system works enables both reader and characters to draw meanings from the entry of a Permanence onto the stage (and I’m not saying that’s what happens, obviously, because you know: spoilers). They become a symbol of both past and present disaster, a signal of crisis, an indication that all hope is disappearing in a puff of smoke. The magic system itself is talking to the reader. Kind of? I might be reaching now …

What can I say in conclusion? That, as with most things in writing there are innumerable ways to skin a cat. (I’ve always wondered what cats ever did to deserve being on the sharp end of such a cruel saying). Magic can be vague and numinous or defined and structured. I still suspect the former is closer to the heart of what makes the genre unique and resonant; but a little bit of structure in your magic can have its bonus effects. The trick, I reckon, is to make it work for you. If you’re going to go to the trouble of thinking through how magic works, make those workings serve and strengthen the story.   If your magic system can embody things you’re looking for, like conflict and tension and stakes, you’ve built yourself a little helper to juice up the narrative here and there.