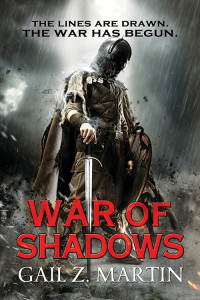 In ICE FORGED (US | UK | AUS) and REIGN OF ASH (US | UK | AUS), Blaine McFadden is sent into exile in an arctic prison colony for murdering the man who dishonored his sister. When a war destroys mankind’s ability to control magic and bend it to their will, out-of-control wild magic brings deadly storms, monsters pulled through rifts from other realms and a madness that drives its victims to violence. Blaine discovers that he might just be the only one who can put things right.

In WAR OF SHADOWS, Blaine and his convict friends discover that plenty of people are trying to kill them. Blaine’s attempts to fully restore the magic affect the new status quo. With the king and nobility gone, there’s a power vacuum, and some ruthless players have decided to fill that gap themselves. As warring factions fight over territory in the kingdom of Donderath, Blaine emerges as a warlord trying to restore the rule of law, amid betrayal, intrigue and opponents who will go to any length to see him dead.

I’m not nice to my characters. It’s true. Blaine’s had a rum go of it. Raised by an abusive father, forced to make a choice no one should have to make in order to save his sister and younger brother, condemned by the king and exiled to the edge of the world—it hasn’t been a good seven years. Yet Blaine rises to the challenge, not because he covets power, but because he doesn’t want to live in the world as it is, and someone has to step up to make the difference.

Blaine doesn’t go looking to be a hero. In fact, when he kills his father, he fully expects to die for the crime to spare his sister and brother from further abuse. An act of ‘mercy’ commutes his sentence from hanging to exile, but the Velant prison colony is known for its inhumane, grueling conditions. But Blaine finds it within himself to adapt, and that ability to change lies at the heart of the series. Blaine and his convict friends, as well as the survivors back in Donderath, find strengths they never knew they had when confronted with challenges they never expected to face.

Blaine’s story is also about the power of ‘the family you make.’ In the brutal environment of Velant, and then later as colonists in the harsh environs of Edgeland, Blaine survives because of the ‘family’ of loyal friends who band together to protect each other. Back in Donderath, his ‘found’ family combines with what remains of his blood family, and several key people are added to the group. Blaine’s companion’s skills, courage and loyalty make the difference for his survival and for having a chance to fix the magic and set things right.

I’m also having fun looking at how a kingdom reacts in the face of overwhelming disaster, destruction of both economic and governmental infrastructure and continued instability. That ‘perfect storm’ combination affects everything from food production to religious identity to social cohesion, turning everything that people thought they knew upside-down. It’s a crucible from which everyone emerges changed—if they emerge at all. And whatever solution is found, one thing is certain: nothing will ever be the same as it was before the disaster.

Depending on your view, that’s either a terrifying statement or the glimpse of hope at the end of the storm.

War of Shadows isn’t the end to Blaine’s story. I’m working on Book 4, SHADOW AND FLAME, right now. So there is more to come. Because surviving is just the beginning of the journey.

My Days of the Dead blog tour runs through October 31 with never-before-seen cover art, brand new excerpts from upcoming books and recent short stories, interviews, guest blog posts, giveaways and more! Plus, I’ll be including extra excerpt links for stories and books by author friends of mine.  You’ve got to visit the participating sites to get the goodies, just like Trick or Treat! Details here: www. AscendantKingdoms.com.