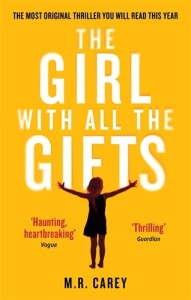 Angus Lamont adds, “Melanie’s story is a completely unique take on a much loved genre, seamlessly blending together a lonely child’s search for love and family with a terrifying journey where she controls the fate of the last adult humans on earth.”

Will Clarke, Co-CEO and Chairman of Altitude Film Entertainment says, “SHE WHO BRINGS GIFTS is a smart take on the sci-fi genre and with a humanity which will draw a young adult audience and those already aware of Mike Carey’s bestselling novel. With the great cast that has come on board we have a highly commercial film which can cut through to a broad audience.”

The Brit List is a compendium of stellar scripts by non-US writers, set up to complement the US Black List with previous scripts which have made the List in previous years including The King’s Speech, My Week with Marilyn and The Best Exotic Marigold Hotel.

About Mike Carey’s novel, The Girl with all the Gifts

Screenwriter and director Joss Whedon, creator of TV series Buffy the Vampire Slayer and writer-director of The Avengers and Avengers: Age of Ultron says of Carey’s novel, “The story of Melanie and the people around her is so thoughtfully crafted, so heartfelt, remorseless and painfully human . . . It left me sighing with envious joy, like I’d been simultaneously offered flowers and beaten at chess. A jewel.”

The Girl with all the Gifts was first published in 2014 by Orbit.