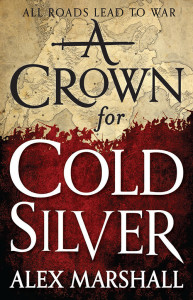 I’ve played D&D since I was 14. The maps in the books and modules were one of my favorite aspects. As a kid, I always made my own maps and worlds. Surprisingly, it took a long time to put my love of making my own maps into another way to making a living with my art.

LP: Tim and I had worked on a few maps together by this point, so I knew he would be really excited to work with Alex on his map. I introduced them and let them start talking directly. Although I don’t get too involved in art-directing a map once it gets going, I do really enjoy staying in the loop on emails, because I see all the wonderful brainstorming happening.

Meanwhile I was working on cover designs, and it started to look like the cover was going to be very graphic and textural, and I was playing with a lot of parchment textures. I realized that not only would the map be great on its own—it would be exactly what I needed for the cover.

Some covers in process of design:

TP: One of the first things Alex told me about the book was the inspiration behind the world was heavy metal. He provided a rough sketch of the world, where the land was literally shaped like a star, points and all.

He wanted to move away from such a literal interpretation as the book developed.

AM: Part of my laying out the world in a roughly recognizable shape was so the reader could visualize the world even in the absence of a map – one never knows when a map will be provided (both literally and philosophically).

It’s also worth mentioning that I’ve run a few games in my day, hence the manifest quality (sic) of the map I provided Tim – I daresay it’s as fine a piece of work as ever graced the back of my brown-paper-bag-covered algebra textbook back in high school: 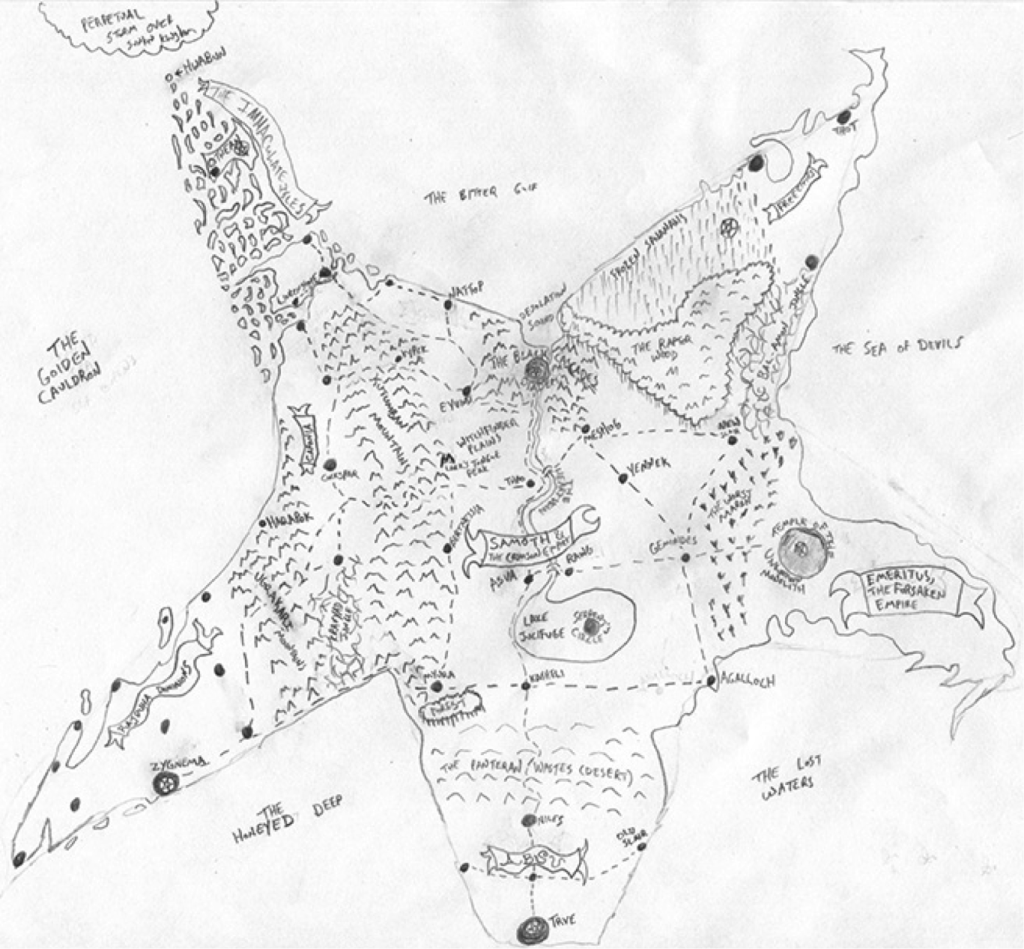 TP: Alex asked if I could move the world away from this, and make it more natural looking.

However, I thought if I could keep a small nod to that original idea of his, it would make the map more interesting. So I thought about that as I started working out the details.

Alex and I went through seven rounds of changes and tweaks. Some of them were small, some required redrawing parts of the land. When working on a map, there’s no set amount of rounds. A map has many tiny pieces to it and you just have to make sure it’s right when it goes to press.

Alex was so easy to work with, because his directions were clear and made sense, even if they were just, “I decided I wanted to change something.”

AM: Tim has the patience of a saint. I’m pretty sure I sent no less than three frantic emails with the subject line “One LAST Change, If It’s Not Too Late?” Despite having already worked on A Crown for Cold Silver for several years when Tim and I started working on the map, I tend to continually revise my novels, but of course tweaking the text meant tweaking the map…

TP: It’s only ever too late when it’s in the hands of the printer, in my mind. The map grew richer and more interesting each revision, as extra details were added, such as forests and rivers and other geographical details not on the original sketch.

AM: The thing about maps is that we assume their exactitude, when in fact the entire history of cartography is riddled with errors and inaccuracies, some of them resulting from ignorance, others from bias. [TP: Interesting fact, map makers often inserted mistakes on purpose so as to try and catch people copying their maps] So in revising the map with Paul, I was more concerned with making sure the most textually important locations were represented than I was with pinning down every little geographical detail and defining the world as precisely as possible. I know some authors feel that mapping their fantastical settings can constrict their imaginations, but I found the process of designing the Star with Paul gave me a richer picture of the world. At the same time, I don’t feel like the map has to define where I take the story in later books–there’s a lot of open space out there, and the only one who can determine if this map was actually drawn to scale is me. 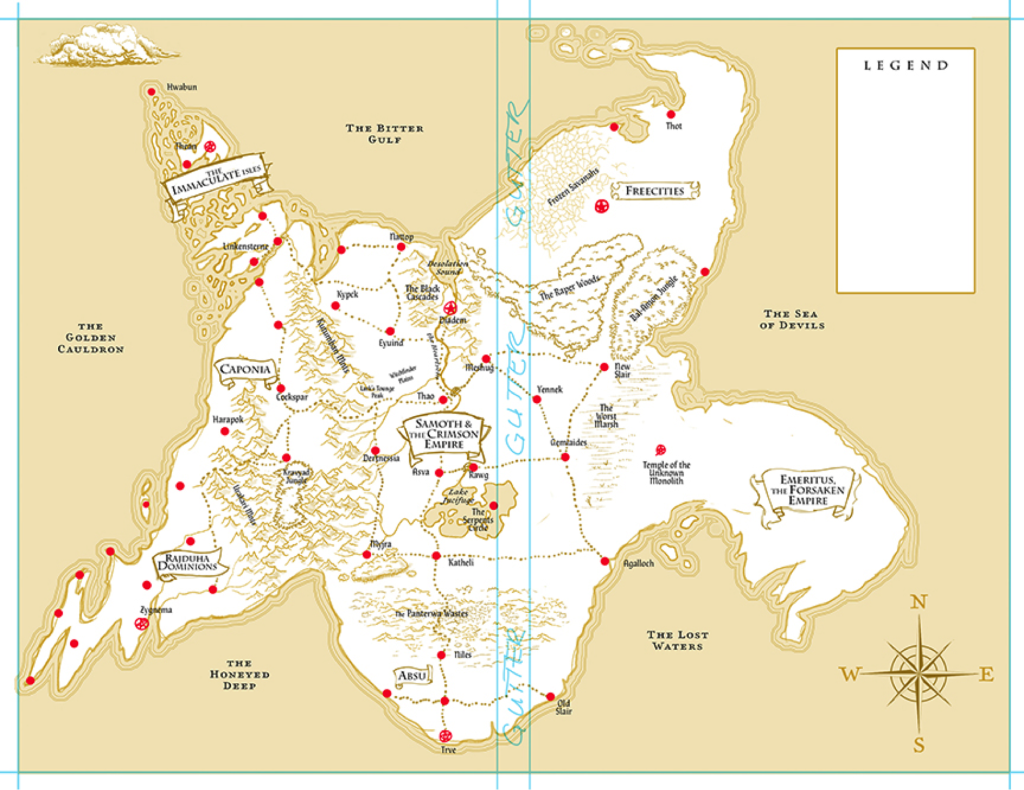 TP: It was between the first and second revisions, that I had an idea on how I could suggest the heavy metal inspiration for the book. I arranged the names of the 5 bodies of water to form a circle, and even some of the land to help suggest it. Even some of the Gates, fell on the circle.

AM: As Tim mentioned, my deep and abiding love of metal was one of the many influences on the novel, especially when it came to the geography and place names. At the same time, I didn’t want it to be too obvious lest it cheapen or cheesify the narrative. As the novel evolved through various drafts its world became more organic, but even in its final incarnation, the savvy music lover might be able to use the map to decipher a soundtrack for A Crown for Cold Silver.

TP: Usually early on, I have an idea of what I want for the final look. In this case, the folded creases, the tattered edge and to look as if water had dripped on it. A well-used map.

But I don’t start bringing in that in until later, so the focus at first is getting all the information right and in place.

I work in Photoshop, and in lots and lots of layers, which I try and keep organized. With so much information, being able to find the right layer is important.

Even after the final art, there can be changes. With so much to check, it’s easy to miss something, and it’s more important to be right when dealing with information. Like I said, I’m more concerned with the map being right than how long it takes to get there.

This map has been one of my favorites to work on, because I was allowed the freedom to introduce my ideas, and as the map grew, Alex wanted it to be more than just a marker where the events of the story took place. I honestly probably asked Lauren one too many times when I can show it off.

AM: For my part, I couldn’t be happier with Tim’s excellent work, and greatly appreciate Lauren’s contracting him. The novel is richer for his artistry.

LP: So there you have it, the fabulous final map for A Crown for Cold Silver by Alex Marshall. If you’re interested in finding out more about the book, read this great review from NPR. 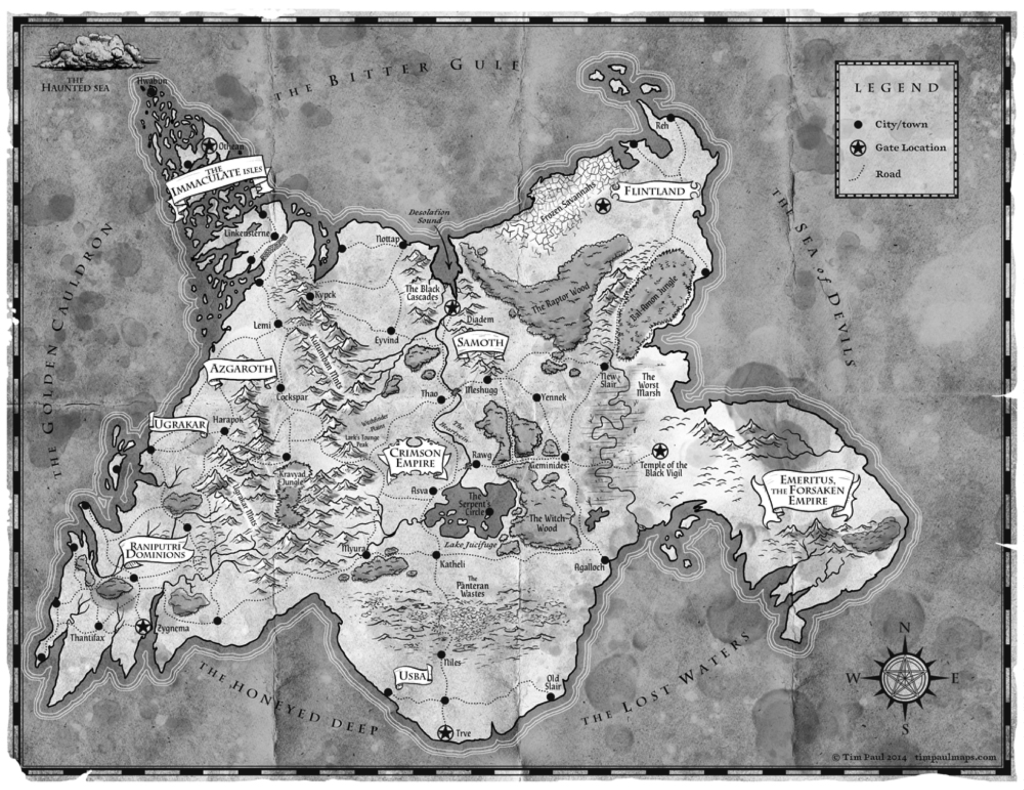