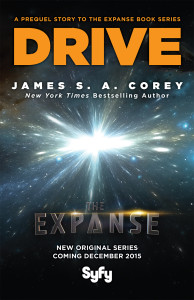 It was great seeing so many of you at San Diego Comic-Con last weekend. For those of you who couldn’t make it this year, we brought you back a souvenir!

Check out DRIVE by James S. A. Corey on Syfy.com. This free short story is set 150 before the events of LEVIATHAN WAKES (US | UK | AUS) and concerns the invention of the Epstein Drive.

We also brought back pictures of Syfy’s Expanse Cafe, which you can check out on the James S. A. Corey Facebook fan page.

The main event of the weekend was The Expanse panel where the first episode was screened in its entirety. While you’ll have to wait until December to see it on television, you can check out some of the panel highlights and reviews by io9 and B&N’s Sci-Fi & Fantasy blog right now!

Last but certainly not least, Entertainment Weekly has the exclusive on a new extended trailer. Go. Now. Watch. Is it December yet?

The Expanse Is the scifi show we’ve been wanting since Battlestar Galactica. http://t.co/JCVcr48Sq5

#TheExpanse screening report from #SDCC: This is the show that will rekindle your love for Syfy. http://t.co/QQNoE8kpLG