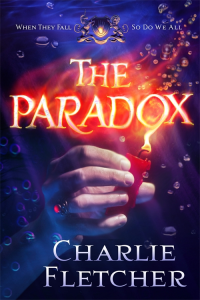 And now it’s here! THE PARADOX, the very, very, very much-awaited sequel to Charlie Fletcher’s THE OVERSIGHT is out this week, and . . .

“I’ll certainly be reading the next one” Cory Doctorow, BoingBoing

the critics who loved THE OVERSIGHT . . .

“The start of something amazing” Mike Carey

“It’s going to be something special” SF Site

“I’d read a prequel this evening, a sequel as soon as.” Niall Alexander, Tor.com

“Promises a trilogy worth sinking your teeth into” SciFiNow

“Go on and relish The Oversight without further prompting – then we can all wait eagerly for more!” Locus

If you missed Charlie at the Nine Worlds convention last week, he’ll be at Edinburgh Book Fair on 21st August and Sledge-Lit in Nottingham in November. If you can’t make it to the UK, look out for his upcoming slot on John Scalzi’s The Big Idea, or find out what he’s up to on twitter at @CharlieFletch_r. THE PARADOX is out this week in ebook and print.