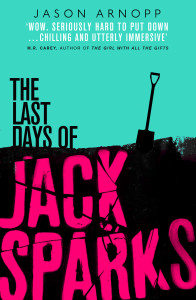 Please see below for a press release which has just been sent out:

Orbit UK has acquired at auction two titles by Jason Arnopp, an author, script-writer and journalist who has previously written fiction for Doctor Who and Friday the 13th, comedy for Radio 4, and who has worked as a journalist for publications such as Heat, Q, The Word, Kerrang! and SFX. The main edition of the first book, entitled THE LAST DAYS OF JACK SPARKS (UK|ANZ) , will be released in July 2016.

THE LAST DAYS OF JACK SPARKS claims to be an account of the untimely demise of Jack Sparks – a controversial journalist and social media star who died during the course of researching his new book on the occult.

The majority of the book is said to be written by Jack Sparks himself – compiled from files found after his death – but it also includes interview transcripts, emails and additional material from those who came into contact with the journalist at the time of his passing.

Anna Jackson, Senior Editor at Orbit UK, acquired UK and Commonwealth rights from Oli Munson at A M Heath in an auction involving three other publishers.  Jackson says ‘I’m so excited to be working with Jason Arnopp on THE LAST DAYS OF JACK SPARKS – a chilling, addictive and razor-sharp tale about the downfall of a highly provocative figure in the world of social media. Whatever your thoughts about Jack Sparks himself, the world will be gripped to read about the mysterious circumstances surrounding his death. Whilst many questions will be answered, ultimately the reader will be invited to decide for themselves exactly what happened to Jack.’

Jason Arnopp comments: ‘I’m very pleased that the story of Jack’s final days will be revealed to the world, and I’m overwhelmed to see the reaction the book has had so far. It explores many questions about Jack’s life – why was he so convinced the exorcism he observed was fake? Who really created that terrifying video that appeared on his YouTube channel? This book will provide some answers. But I warn you now: this is a deeply unsettling read…’

For the release of THE LAST DAYS OF JACK SPARKS, a campaign is starting this Halloween, intended to raise questions over the truth behind the life and death of the notorious Jack Sparks.  Find out more at www.JackSparks.co.uk