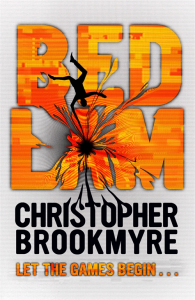 Three years ago Orbit published BEDLAM, a science fiction novel by Scottish crime legend Christopher Brookmyre, with a protagonist who gets trapped in a video game. Fans of the book included Iain M. Banks, Charles Stross and comedian Ed Byrne.

Chris has been hard at work with Brighton-based games company Redbedlam to bring his dreams into reality (well, virtual reality) and now the video game they’ve designed has been unleashed! You can play Bedlam on PS4, Xbox One or download on Steam for PC.

The game takes place in the same world as the novel, with a brand new protagonist, Heather Quinn, voiced brilliantly and acerbically by Scottish actress Kirsty Strain. Read all about BEDLAM at the game’s official website, check out the reviews below or watch Chris himself taking the This Is Xbox team through the game in this video:

‘BEDLAM’s world and story are immensely likeable. It has a rare, caustic wit we don’t usually see in video games thanks to Brookmyre’s sense of humour, and Heather is the sort of leading lady we should see more of’ Gamesradar

‘Heather Quinn earns a spot as one of the best video game heroines ever, by virtue of tremendous writing and some stellar voice acting’ Venturebeat

‘BEDLAM plays just like shooters of old – you skate at high speeds through levels, circle-strafing enemies and even performing the occasional rocket-jump. There are countless name-checks of and references to familiar franchises’ Gameranx