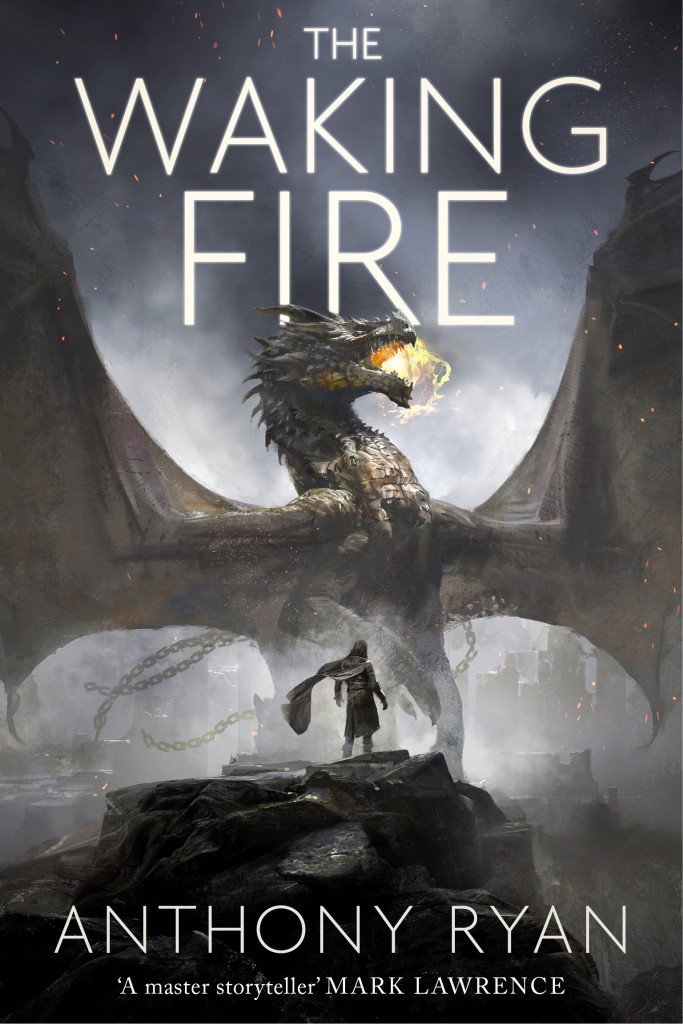 The stunning illustration is courtesy of illustrator Jaime Jones, with the design handled by Little, Brown’s very own Nico Taylor.

THE WAKING FIRE – Book One of Draconis Memoria –  is an absolute blast (that’s the official scientific term). As the cover suggests, fire-breathing creatures of the draconic variety feature heavily, but it’s also packed with exploration, adventure and a furious battle for empire.

For decades the lands of the Ironship Syndicate have been defended by the ‘blood blessed’ – men and women able to channel the powers contained in the potent blood of wild drakes. Elite spies and assassins, their loyalty has established the Syndicate’s position as the greatest power in the known world.

Yet now a crisis looms. The drake bloodlines are weakening, and war with the Corvantine Empire seems inevitable. The Syndicate’s only hope of survival lies with the myth of a legendary drake, whose powerful blood might just turn the tide of the war – if it even exists.

The task of hunting down this fabled creature falls to Claydon Torcreek, a petty thief and unregistered blood blessed. He’s handled many valuable things in his time (most of them illegal) but nothing as priceless as his nation’s future.

THE WAKING FIRE will be published this July in hardback, trade paperback, ebook and audio formats.

Anthony Ryan is the author of epic fantasy sensation BLOOD SONG (UK | ANZ] as well as TOWER LORD (UK | ANZ) and QUEEN OF FIRE (UK | ANZ), which were both New York Times bestsellers. The Raven’s Shadow trilogy has sold over half a million English-language copies worldwide. Anthony lives in London and is a full time writer. He can be found online at his website and on Twitter as @writer_Anthony.

‘Blood Song is an amazing debut and Anthony Ryan is a master storyteller’ – Mark Lawrence, author of Prince of Thorns

‘An utterly engrossing high-fantasy from a major new talent’ – Buzzfeed

‘Epic fantasy at its best’ – Bookbag