We are pleased to unveil the cover for TAKE BACK THE SKY, the anxiously awaited final book in Greg Bear’s beloved War Dogs trilogy. Cover design by Kirk Benshoff. 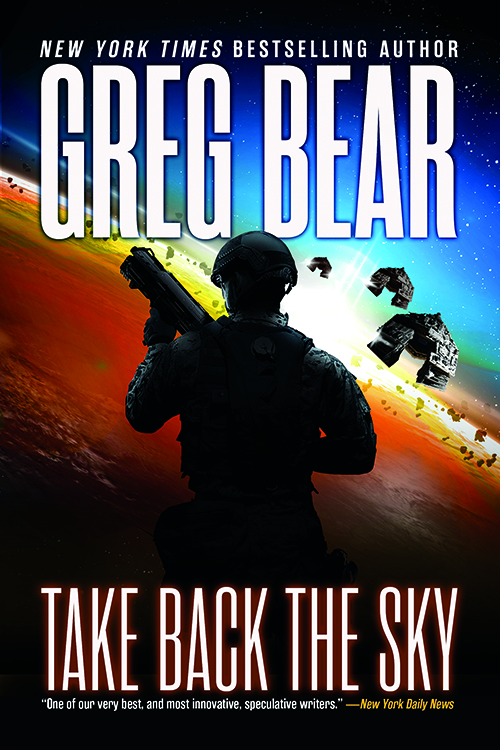 Marooned beneath the icy, waxy crust of Saturn’s moon, Titan, Skyrine Michael Venn and his comrades face double danger from Earth and from the Antagonists, both intent on wiping out their growing awareness of what the helpful alien Gurus are really doing in our solar system.

Haunted by their glassy dead and by the ancient archives of our Bug ancestors, the former combatants must now team up with their enemies, forget their indoctrination and their training, and journey far beyond Pluto to the fabled Planet X, the Antagonists’ home world, a Sun-Planet in the comet-generating Kuiper belt. It’s here that Master Sergeant Venn will finally understand his destiny and the destiny of every intelligent being in the solar system — including the enigmatic Gurus.

Praise for the War Dogs series:

“Stuffed with adrenaline-pumping action and mystifying ambiguity, Bear’s series launch is a tempest of rousing SF adventure with a dash of Peckinpah.” — Publishers Weekly

“Packed with adventure and incident…and conveyed with gritty realism.” — Kirkus

“Bear, as a writer, seems almost more at home on the deadly flats of Mars and in the memory-haunted chambers of the eastern Drifter than he does back on planet Earth.” – San Diego Union-Tribune