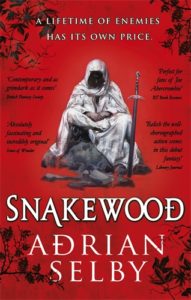 We were thrilled last year to publish Adrian Selby’s fantasy debut SNAKEWOOD, which has received rave reviews for its razor-sharp action scenes, original worldbuilding and gripping plot. If you’ve not yet read this wonderfully gritty tale about a band of twenty mercenaries who are being assassinated one by one by an unknown enemy, then never fear: the paperback is out this week!

That’s not all – we’re delighted to announce that Orbit have acquired two new books from Adrian and his agent Jamie Cowen, both fantasy adventures set in the same world as SNAKEWOOD. Adrian took twenty years to write his debut tale of twenty mercenaries, but we won’t have to wait that long again – the second book will be out in 2018. We’re counting down the days already.

‘Contemporary and as grimdark as it comes’ British Fantasy Society

‘Wears its grimdark on its sleeve … a thrilling tale of adventure, betrayal, triumph and loss’ Interzone

‘A lot to enjoy, especially if you are a fan of dark, gritty, old-soldier stories’ Fantasy Faction

‘Demonstrates the command of style, character, plotting, and world building of a seasoned author’ Booklist

‘I give it nothing but the highest recommendation’ Grimdark magazine