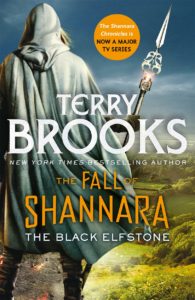 The release of THE BLACK ELFSTONE (UK | ANZ) marks an important moment in the fantasy calendar, and for millions of fans around the world, it’s a bittersweet occasion.

It was in 1977 that Terry Brooks released what was to become one of modern fantasy’s most popular novels ever, The Sword of Shannara. It kick-started a fantasy phenomenon which has lasted for 40 years and over 28 novels, and today Terry’s Shannara books are still as popular as ever. He is lauded as one of the true masters of modern fantasy, with bestselling authors such as Brent Weeks, Patrick Rothfuss, Philip Pullman, Christopher Paolini and Peter V. Brett all citing him as a powerful influence on their writing and the genre as a whole.

And now with THE BLACK ELFSTONE – the first book in the Fall of Shannara series – it is with both excitement and sadness that fans will see Terry start to bring the world to a conclusion.

In an interview with UNBOUND WORLDS, Terry had this to say:

“This four book set is intended to give readers new and old, but especially those who have stayed with me all these years, one last look at the Four Lands and a cast of characters who will write the final story to how things turn out in my lifetime, anyway, for this world. It does not tie up all the loose ends nor does it answer all questions. But it does look forward, it does hearken back, and it does spin one last tale of characters that will hopefully resonate with readers. Much of what you will read will remind you of things that happened in early books and of what I think were my strengths in writing epic fantasy for 50 years”

You can read the rest of the interview here, and THE BLACK ELFSTONE (UK | ANZ) is available in all good bookshops now.