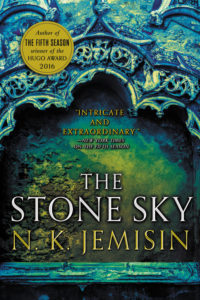 Congratulations go to N. K. Jemisin as THE STONE SKY (US | UK | AUS) hit both the New York Times and the USA Today bestseller lists this week!

And, there’s even more good news to share. THE FIFTH SEASON (US | UK | AUS) is now in production for a television series at TNT. The project is in development with Leigh Dana Jackson (24: Legacy, Sleepy Hollow) writing the adaptation.

The Fifth Season blew critics away with rave reviews, and The Stone Sky continues to impress readers. Here’s a sample of what they’re saying:

“The depth and breadth of Jemisin’s achievement with this trilogy is geologic. These books are a revolution in which I want to take part.” — NPR Books

“Jemisin deliberately refuses to provide easy answers: they’re simply not available, in this world our ours. Painful and powerful.”— Kirkus (starred review)

“Vivid characters, a tautly constructed plot, and outstanding worldbuilding meld into an impressive and timely story of abused, grieving survivors fighting to fix themselves and save the remnants of their shattered home.” — Publishers Weekly (starred review)