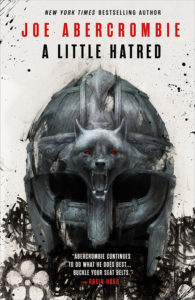 The world is about to feel A LITTLE HATRED. And we’re thrilled to be able to show you its newest face. Check out the gorgeous (and just a bit menacing) cover for Joe Abercrombie’s eagerly anticipated epic fantasy A Little Hatred. 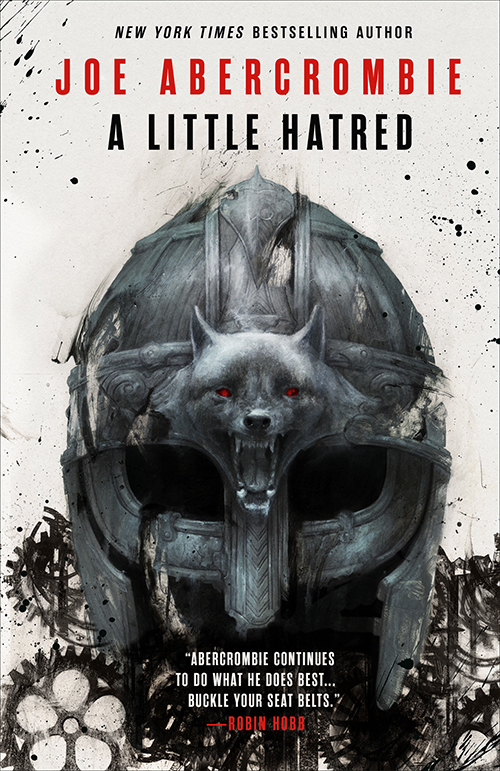 If you’ve never read Abercrombie (and how could this be true…), A Little Hatred will be a fantastic starting point. For the rest of us who already know that a new Abercrombie book means shifting all priorities to the wayside, all we can say is that you’re going to love this one, and you’ll be able to get your hands on it on September 17th.

The chimneys of industry rise over Adua and the world seethes with new opportunities. But old scores run deep as ever.

On the blood-soaked borders of Angland, Leo dan Brock struggles to win fame on the battlefield, and defeat the marauding armies of Stour Nightfall. He hopes for help from the crown. But King Jezal’s son, the feckless Prince Orso, is a man who specializes in disappointments.

Savine dan Glokta – socialite, investor, and daughter of the most feared man in the Union – plans to claw her way to the top of the slag-heap of society by any means necessary. But the slums boil over with a rage that all the money in the world cannot control.

The age of the machine dawns, but the age of magic refuses to die. With the help of the mad hillwoman Isern-i-Phail, Rikke struggles to control the blessing, or the curse, of the Long Eye. Glimpsing the future is one thing, but with the guiding hand of the First of the Magi still pulling the strings, changing it will be quite another…

“Abercrombie continues to do what he does best . . . Buckle your seat belts.” — Robin Hobb, New York Times bestselling author.

“Abercrombie squeezes your heart till it matches his beat. No one writes with the seismic scope or primal intensity of Joe Abercrombie.” — Pierce Brown, #1 New York Times bestselling author

“A Little Hatred is Abercrombie at his very best: witty, wise, whip-smart. Masterfully plotted . . . . I had high hopes for this book, and it exceeded them all.” — Nicholas Eames, author of KINGS OF THE WYLD (US | UK)

“Brutal, unforgiving, and terribly fun. Everything awesome readers have come to expect from Joe Abercrombie.” — Brian McClellan, author of SINS OF EMPIRE (US | UK)

“Rife with emotion with wit to spare, both honed to an effortlessly fine edge. A Little Hatred is the joy of watching a master of the craft with his tools at their sharpest.” — Sam Sykes, author of SEVEN BLADES IN BLACK

“Joe Abercrombie’s powerful voice raises the bar in any literary genre. Fantasy fans are beyond fortunate he chose this one.” — Myke Cole, author of The Armored Saint