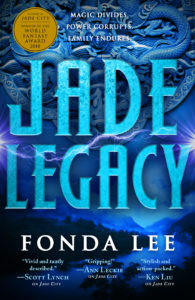 After many entertaining guesses from fans of Fonda Lee’s Green Bone Saga, we’re thrilled to reveal the actual title and cover of the final volume of the series that began with the World Fantasy Award-winning JADE CITY (US | UK) and continues in the newly-published and much-anticipated JADE WAR (US | UK)…

Check out the gorgeous cover for JADE LEGACY, designed by Lisa Marie Pompilio: 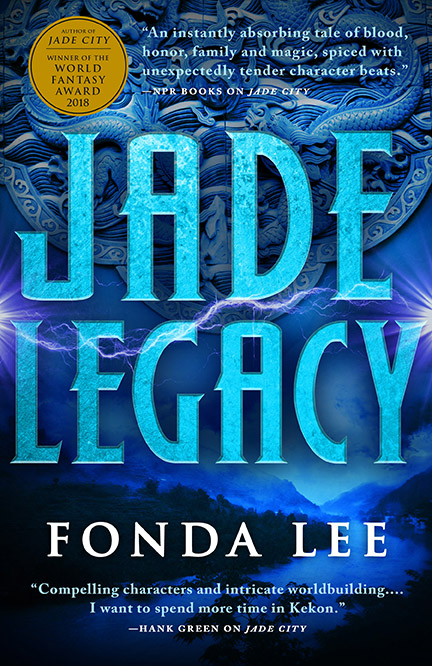 To tell you a little more about the book:

Jade, the mysterious and magical substance once exclusive to the Green Bone warriors of Kekon, is now known and coveted throughout the world. Everyone wants access to the supernatural abilities it provides, from traditional forces such as governments, mercenaries, and criminal kingpins, to modern players, including doctors, athletes, and movie studios. As the struggle over the control of jade grows ever larger and more deadly, the Kaul family, and the ancient ways of the Kekonese Green Bones, will never be the same.

The Kauls have been battered by war and tragedy. They are plagued by resentments and old wounds as their adversaries are on the ascent and their country is riven by dangerous factions and foreign interference that could destroy the Green Bone way of life altogether. As a new generation arises, the clan’s growing empire is in danger of coming apart.

The clan must discern allies from enemies, set aside aside bloody rivalries, and make terrible sacrifices… but even the unbreakable bonds of blood and loyalty may not be enough to ensure the survival of the Green Bone clans and the nation they are sworn to protect.

In the meantime, catch up on all the latest happenings in Kekon with Jade War, and go tell Fonda how much you love her new cover at her website and on Twitter @FondaJLee!